First some god breathed the thought in my heart to set up a great web in my halls and fall to weaving a robe—fine of thread was the web and very wide; and I straightway spoke among them: ‘Young men, my wooers, since goodly Odysseus is dead, be patient, though eager for my marriage, until I finish this robe—I would not that my spinning should come to naught—a shroud for the lord Laertes against the time when the fell fate of grievous death shall strike him down; lest any one of the Achaean women in the land should be wroth with me, if he were to lie without a shroud, who had won great possessions…’ spoke Penelope in Homer’s Odyssey (Book 19, 138-147). Weaving in Ancient Greece is a fascinating topic to explore… https://www.perseus.tufts.edu/hopper/text?doc=Perseus%3Atext%3A1999.01.0136%3Abook%3D19%3Acard%3D89

Searching for information on the famous Black-Figure Lekythos by Amasis Painter at the Metropolitan Museum of Art in New York of women making woolen cloth, I came across a site I would like to share… and acting more like a Curator rather than a Teacher, I present you with THE PENELOPE PROJECT site I am fascinated about. I like the way it was founded, how it operates, and the wealth of information on the topic of Weaving in Ancient Greece. I wish I was a member of this amazing group of scholars… who at the Institute for the History of Technology and Science at Deutsches Museum in Munich… aim to integrate ancient weaving into the history of science and technology, especially digital technology… encompasses the investigation of ancient sources as well as practices and technological principles of ancient weaving… and setting up in Munich a PENELOPE laboratory they detect the models and topologies of weaves and develop codes to make them virtually explorable. https://penelope.hypotheses.org/It is worth exploring and you will most definitely enjoy browsing it!

Back to the Black-Figure Lekythos by Amasis Painter at the Metropolitan Museum of Art in New York of women making woolen cloth… I love every decorated part f it… from top to bottom! https://www.metmuseum.org/art/collection/search/253348?searchField=All&amp;sortBy=Relevance&amp;high=on&amp;ao=on&amp;showOnly=openAccess&amp;ft=*&amp;offset=560&amp;rpp=80&amp;pos=573

On the body of the Metropolitan Lekythos, women are making woolen cloth. In the center, two women work at an upright loom. To the right, three women weigh wool. Farther to the right, four women spin wool into yarn, while between them finished cloth is being folded. https://www.metmuseum.org/art/collection/search/253348?searchField=All&amp;sortBy=Relevance&amp;high=on&amp;ao=on&amp;showOnly=openAccess&amp;ft=*&amp;offset=560&amp;rpp=80&amp;pos=573

Making cloth is one of the most important responsibilities women of Ancient Greece were entrusted with. They were responsible to create the clothing worn by all members of their family, as well as textiles for household needs. Their craftsmanship was testimony to their industriousness, ‘value’ as a wife, and ‘beauty’ as a woman. According to Homer, making cloth, was the work of elite women: Helen, Andromache, Penelope, Arete, as well as goddesses. Circe and Calypso wove, to say nothing of Athene herself, warrior and weaver both. They wove patterned cloth which, in the case of the first three, expressed their own qualities, as well as their relationship to particular men. Helen weaves the story of the Trojan War, Andromache weaves flowery love charms, not knowing that Hector is dead, and Penelope weaves a stratagem to forestall betrayal of Odysseus… https://chs.harvard.edu/susan-t-edmunds-picturing-homeric-weaving/

The Metropolitan Lekythos is attributed to Amasis the Painter, an artist whose real name is a mystery, known today by the name of the Potter Amasis whose works he most often decorated. They were both leading black-figure artists active around 550–510 BC. This Metropolitan Lekythos displays characteristics the Amasis the Painter incorporated in his oeuvre like symmetry, precision, clarity, harmony, and a preference to small scale figures.

For a PowerPoint on the work of Amasis, please… Check HERE!

An interesting 1985 Book to read, prepared to accompany an exhibition held at the Metropolitan Museum of Art, the Toledo Museum of Art, and the Los Angeles County Museum of Art in 1985-1986… is titled The Amasis Painter and His World: Vase Painting in Sixth-Century B.C. Athens by Dietrich von Bothmer and Alan L. Boegehold, and you can download it… https://www.getty.edu/publications/virtuallibrary/0500234434.html 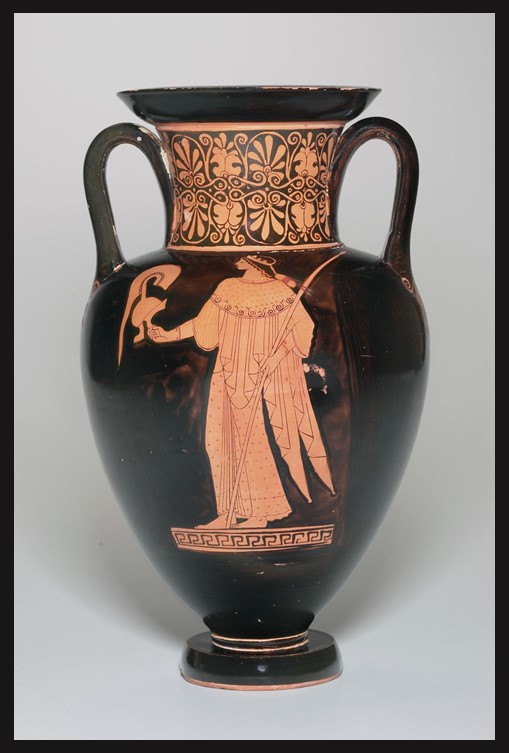 The Orphic Hymn to Athena is an exuberant celebration of the goddess with intriguing images of her qualities… “Mother of Art in all your abundance, catalyst of progress! / You bring folly to the corrupt and a sense of purpose to the pure! / Indeed, you are male and female in one, / Patron of war and wisdom, / You are fluid of form, a dragon, / Infused with inspiration of the Gods! / Rightly-honored One, who brought Phlegran giants down to defeat, / You driver of steeds, Tritogeneia, save us from evil, bearing Victory in your arms! / Day and night, eternally, in even the loneliest hours, / Hear my prayer, and grant us an abundant peace, fulfillment, good health. / Make prosperous the hour, gray-eyed One, inventor of Art, / The object of the people’s ceaseless prayers– / My Queen!” I like it… and I will use it as an introduction to my BLOG POST Amphora showing Athena and Hermes. http://commonplacebook.com/journal/inspiration/ancient-greeks-hymns-to-athena/

We know nothing about him… the name we use today, Berlin Painter, is conventional, given to this talented Attic Greek vase-painter by Sir John Beazley based on the “system of forms” technique he used to identify ancient Greek pottery-painters. All scholars can attest, is that the Berlin Painter was most talented, a rival to the Kleophrades Painter, a prominent member of the Pioneer Group, who introduced red-figure painting… and more! The Berlin Painter introduced new principles of style and design. He set his figures free of frames and side pattern bands, allowing them to dominate the composition as they stand majestically against the black background. The Berlin Painter is the master of refined grandeur! https://www.beazley.ox.ac.uk/tools/pottery/collection/johnbeazley1.htm and https://www.britannica.com/biography/Berlin-Painter

As the Yale University Art Gallery experts write for the unprecedented 2017 Exhibition The Berlin Painter and His World at Princeton Art Museum “The Berlin Painter’s style is distinguished by a suave elegance and a palpable tension between shape and decoration. His figures, and the ornament accompanying them, are executed with taut, dexterous precision, whether on water jars (hydriai), large wine bowls (kraters), or smaller shapes such as jugs (oinochoai) and oil bottles (lekythoi). The single figures on either side of his amphorae frequently share the same conceptual space. Accompanied by little or no ornament and spotlighted against the black ground, they are framed only by the contours of the vessel itself.” https://cfileonline.org/exhibition-athenian-vase-painting-makes-its-formal-debut-with-first-solo-show/

For a PowerPoint on Berlin Painter Amphoras, please… Check HERE!

Inspired by the François Vase is a Grade 7 Activity my students enjoy doing!

François Vase is exhibited at the National Museum of Archaeology in Florence. It is “a large black-figure krater, a large vase in Ancient Greece believed to be used for watering down wine, from c. 570 BC. The design is fascinating and, if one looks carefully, you will find both the signature of the potter, Ergotimos and the painter, Kleitias. This krater is named the “François Vase” after the archaeologist who found it in 1844. ” https://www.visitflorence.com/florence-museums/maf-archeological-museum.html

Instructions on what to do: During class, students are introduced to ancient Greek pottery, and more specifically the importance and characteristics of the François Vase. This Activity is based on the classroom lectures, student research on the subject, and ultimately student creativity and imagination. So, ……

The PowerPoint, teachercurator has prepared, can be seen if you… Click HERE! 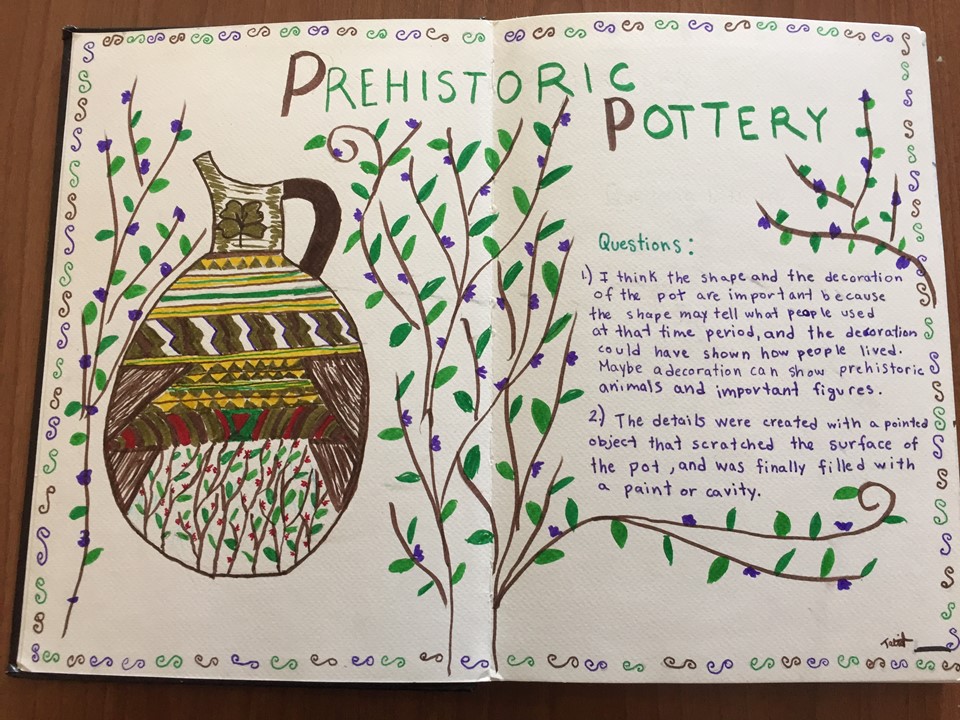 by admin with No Comment Ancient Greek ArtArtPotterySocial StudiesStudent Activities

My Grade 6 Host Country Studies Class is on the History, Art and Culture of the city we live in, Thessaloniki, and our first RWAP (Research-Writing-Art-Project) is on the Prehistoric Pottery of Thessaloniki.

Archaeologists and Art Historians love Pottery! Even the smallest broken pieces, or sherds as they are called, indestructible as they have been for thousands of years, carry valuable information. They tell us how people lived, cooked, or stored their food, they show us ways of decoration and artistic expression. Pottery helps specialists date a site or relate an archaeological site to specific communities and groups of people. In other words, Pottery, humble as it might be, is of great value!

For information on the Stone Age and Greece in particular, go to http://www.thehistoryofancientgreece.com/2016/04/003-stone-age-greece.html

Prehistoric Pottery of Thessaloniki is a Topic and a Project that can be adapted for any Pottery period you explore in your class!

The Project should cover at least 2 pages in the student RWAP Sketchbook. RWAP stands for RESEARCH-WRITING-ART-PROJECT. I usually ask my students to buy an A4 Sketchbook and all RWAP Projects are done there. An alternative option is to use an A3 sized poster paper.

Each RWAP should include 4 parts: a. Title, b. Coloured or B/W copies of at least 2 artworks related to the topic of the Project, correctly identified, c. Writing, d. Art

For the Prehistoric Pottery of Thessaloniki Project, students are asked to:

a. Title: Think and then apply a representative Title for their Project

b. Research: Find photos of at least 2 Greek Prehistoric Potteries, photocopy them, and use them in their RWAP Sketchbook, correctly identified.

c. Writing: Answer the following questions: 1. Which is more important, the shape of the vase or the decoration? Why do you think so? 2. How were the details of the vases created: with paint or by some other means? Look closely and try to identify patterns in the decoration.

d. Art: Become a prehistoric pottery maker! There is so much to get you inspired!!! BE CREATIVE!

The Archaeological Museum of Thessaloniki site is quite informative https://www.amth.gr/en/exhibitions/permanent-exhibitions/prehistoric-macedonia