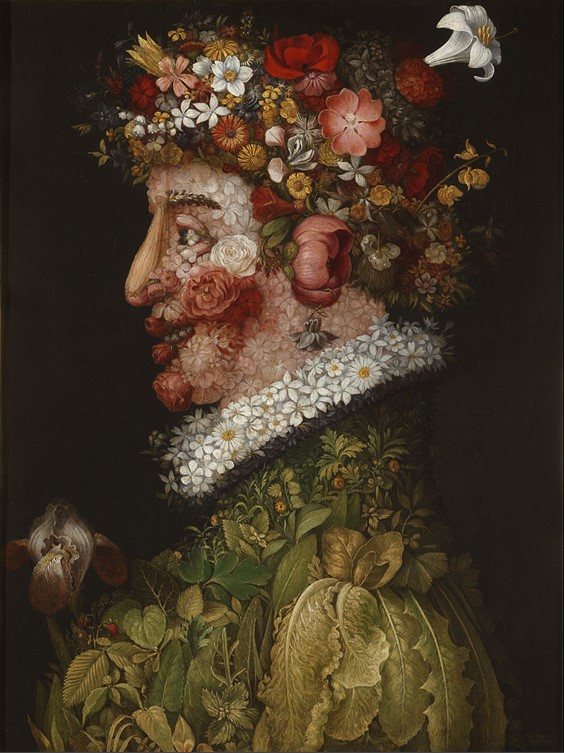 Festive Spring has arrived, / The birds salute it with their happy song. / And the brooks, caressed by little Zephyrs, / Flow with a sweet murmur. / The sky is covered with a black mantle, / And thunder, and lightning, announce a storm. / When they are silent, the birds / Return to sing their lovely song     /     And in the meadow, rich with flowers, / To the sweet murmur of leaves and plants, / The goatherd sleeps, with his faithful dog at his side.     /     To the festive sound of pastoral bagpipes, / Dance nymphs and shepherds, / At Spring’s brilliant appearance. This is Antonio Lucio Vivaldi’s (1678 – 1741) Sonnet A Primavera (Spring). The great composer wrote it as a descriptive accompaniment, experts believe, for the music of his “Four Seasons.” Today the first day of Spring, I took the time to listen and read Vivaldi’s music and sonnet, looking at Spring by Giuseppe Arcimboldo! It was a magical time! https://www.charlottesymphony.org/blog/vivaldis-four-seasons-poems/

A scion of a noble and artistic family, his father was an artist, and his uncle held the position of Archbishop of Milan, Giuseppe Arcimboldo (1526–1593) was in all probability introduced to artists, scholars, and writers from a young age. Born and raised in Milan, the cradle of Renaissance naturalism, young Arcimboldo learned a mode of artistic expression based on the direct observation of nature. Well-trained as an artist Arcimboldo was commissioned to do exceptional work since the age of 21. For example, in 1549 he was commissioned to design stained glass windows for the Duomo, in 1551 he painted coats of arms for the future Emperor, Ferdinand I, in 1556, he created frescoes for the Cathedral of Monza; and, in 1558, he drew the cartoon for the Dormition of the Virgin tapestry, which remains on display in the Como Cathedral in Lombardi to this day. https://www.theartstory.org/artist/arcimboldo-giuseppe/life-and-legacy/#biography_header and file:///C:/Users/aspil/OneDrive/Blog/Renaissance%20Mannerism/Arcimboldo%20ScoopNGA.pdf

Arcimboldo’s friend, the Milanese art critic, and travelogue author, Paolo Morigia writes for him… This is a painter (Arcimboldo) with a rare talent […] having proved his worth both as an artist and as a bizarre painter, not only in his own country but also abroad, he has been given the highest praise, in that word of his fame has reached the Emperor’s court in Germany.” The “court” Morigia refers to, is the court of the Habsburg rulers in Vienna first, where Arcimboldo moved in 1563 at the age of thirty-six, and Prague later, where he served as court painter for twenty-five years. https://www.theartstory.org/artist/arcimboldo-giuseppe/life-and-legacy/#biography_header and file:///C:/Users/aspil/OneDrive/Blog/Renaissance%20Mannerism/Arcimboldo%20ScoopNGA.pdf

While in Vienna, to celebrate the reign of Emperor Maximilian II, Arcimboldo created his “ signature Portraits of the 4 Seasons,” composed of imaginatively arranging elements of nature like plants, flowers, fruits, and vegetables. For each “Portrait” (Spring, Summer, Autumn, and Winter), created in 1563, Arcimboldo combined plants associated with a particular season to form a portrait of that time of year. The series proved extremely popular in the Habsburg court, and Arcimboldo reproduced it several times so the emperor could send versions to friends and important political figures. file:///C:/Users/aspil/OneDrive/Blog/Renaissance%20Mannerism/Arcimboldo%20ScoopNGA.pdf

Closely associated with Mother Earth, Arcimboldo’s “Spring”, the first in his Four Seasons series, takes the form of a youthful woman composed entirely of flowers and bright green leaves. Arcimboldo uses roses and daises, tulips and lily buds, green leaves like strawberry stems, and large leaves of a dandelion plant. In profile, and smiling, showing her lilies of the valley teeth, “Spring” seems fully aware of her beauty and the joy that looking upon her countenance will bring to a viewer. Her youth and beauty are a fitting opening to the series, and the beginnings of the cycle of life and the seasons. http://omeka.wustl.edu/omeka/exhibits/show/arcimboldo-s-gift–the-fantast/fourseasons/spring

For a PowerPoint of the 4 Seasons by Giuseppe Arcimboldo, please… Check HERE!

I would like to draw your attention to a modern take of Arcimboldo’s The 4 Seasons paintings… a set of four and a half meters high fiberglass sculptures of the Four Seasons by American artist and film-maker Philip Haas, created in 2012. Interesting… to say the least! https://crystalbridges.org/blog/the-four-seasons-philip-haas-interprets-giuseppe-arcimboldo/