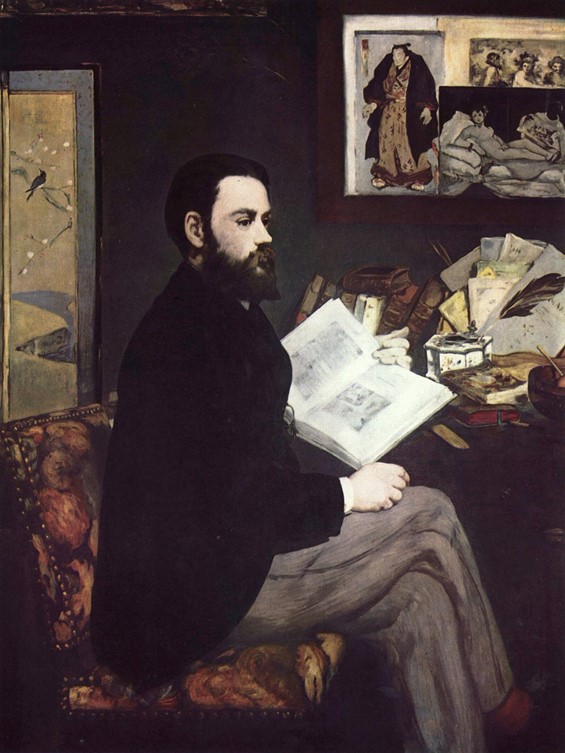 by admin with No Comment 19th century ArtArtImpressionismStudent Activities

“My dear Zola, – I am making up my mind to hold a private show. I have at least two score pictures to exhibit. I’ve already been offered a site in a very good location near the Champ de Mars. I am going to stake the lot and seconded by men like yourself, am hopeful of success. See you soon. Cordially, yours ever, All of us here are delighted with your article, and I am instructed to send you thanks.” This is a quote of Manet’s letter to Zola, Wednesday, 2 January 1867. My new POST Émile Zola by Édouard Manet further shows the relationship between the two men.     https://quotepark.com/quotes/1886775-edouard-manet-my-dear-zola-i-am-making-up-my-mind-to-hold-a-p/

It was 1866 and Émile Zola, disappointed with the way the French Academy and critics treated Édouard Manet’s work in the Salon of 1866 wrote an article on Manet in La Revue du XXe siècle and defended him. He did not stop, however, with this first article. The following year, 1867, when Manet organized a private exhibition on the fringes of the Universal Exhibition, Zola was once more present, supporting his friend, writing about Manet’s New Manner in Art, in the January La Revue du XXe siècle. Later in 1867, Zola republished the 1867 article in the form of a separate pamphlet. Zola wrote that he “instinctively loved” Manet’s Art replying to the critics who vilified the painter by saying  “I replied to them [to the crowd and to the art critics] that fate had undoubtedly already marked at the Louvre Museum the future place of the Olympia and of the Luncheon on the Grass.” This pamphlet was distributed on May 22, 1867, the opening day of the Private Exhibition of Edouard Manet, organized at his expense by the painter in a pavilion near the Pont de l’Alma.     https://www.librairie-faustroll.com/librairie-en-ligne/6684-zola-emile-edouard-manet-1867-dentu-edition-originale-de-cette-rare-plaquette-complet-de-l-eau-forte-d-apres-olympia.html     and     https://msu.edu/course/ha/446/zolamanet.htm

According to the Musée d’Orsay presentation “To thank him, Manet offered to paint Zola’s portrait. The sittings took place in Manet’s studio, rue Guyot. The setting was arranged for the occasion with items characteristic of Zola’s personality, tastes and occupation. On the wall is a reproduction of Manet’s Olympia, a painting which sparked a fierce scandal at the 1865 Salon but which Zola held to be Manet’s best work. Behind it is an engraving from Velazquez’s Bacchus indicating the taste for Spanish art shared by the painter and the writer. A Japanese print of a wrestler by Utagawa Kuniaki II completes the décor. The Far East, which revolutionised ideas on perspective and colour in European painting, played a central role in the advent of the new style of painting. A Japanese screen on the left of the picture recalls this. Zola is seated at his work table. He is holding a book, probably Charles Blanc’s L’Histoire des peintres frequently consulted by Manet. An inkwell and a quill on the desk symbolise the writer’s occupation. This portrait sealed the start of a loyal friendship between Manet and Zola, both eager for success.”     https://www.musee-orsay.fr/en/collections/works-in-focus/search/commentaire_id/emile-zola-313.html

The symbolist artist Odilon Redon (1840-1916), known today for the “dreamlike” paintings, observed penetratingly Zola’s Portrait and in his Salon review (La Gironde, 9 June 1868), wrote… “It is rather a still life, so to speak, than the expression of a human being”. Apparently Zola himself was not entirely delighted with his portrait, which Manet presented to him, and Charles-Marie-Georges Huysmans (1848-1907) the French novelist and art critic noticed that he had relegated the painting to an antechamber of his home.     http://www.visual-arts-cork.com/paintings-analysis/portrait-of-emile-zola.htm 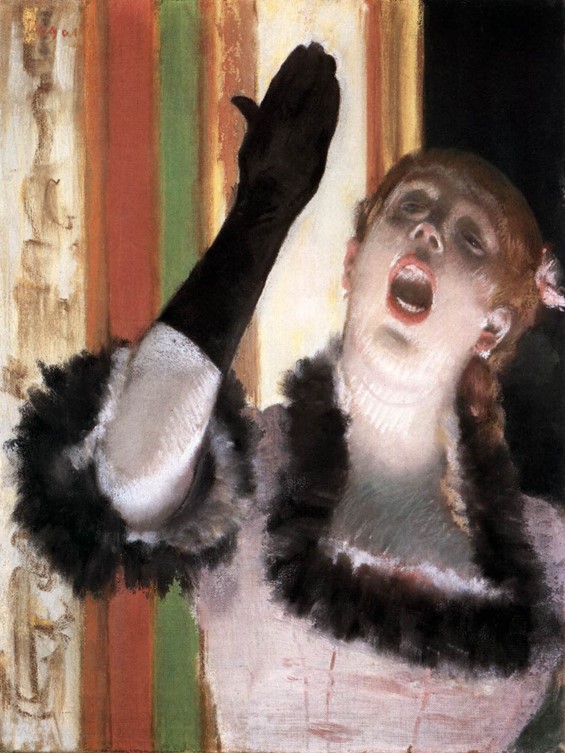 “Art is not what you see, but what you make others see,” Edgar Degas once said. What do we really see in his pastel painting of a Singer with a Glove?

“What a creature he was, that Degas!” Renoir said about him, and he was right! A reluctant Impressionist, the offspring of a wealthy family with Creole ties, Edgar Degas studied in the École des Beaux-Arts in Paris and then in July 1856, he travelled to Italy, where he would remain for the next three years drawing and painting numerous copies of works by the great masters of the Renaissance. However, Degas’s Italian art studies were not conventional. He learnt the secrets of each painter’s art by focusing his attention to a particular detail that had caught his attention, a secondary figure in a large composition, or a minor portrait in a master’s painting.

Upon his return to France in 1859, and for the next thirteen years, Degas kept busy exhibiting, annually, at the Salon (1865-1870) drawing attention with his historic paintings, defending Paris as an enlisted member of the National Guard, during the Franco-Prussian War of 1870, and travelling extensively visiting friends in France or spending a year visiting family in New Orleans (1972). In 1873 Degas was back in Paris, facing the death of his father and financial ruin due to enormous business debts amassed by his brother René. He sold his house and Art Collection to preserve his family’s reputation, and started fresh, producing much of his greatest work, joining a group of young artists who were soon to be known as the Impressionists.

Degas participated in seven of the Impressionist Exhibitions (1874-1886) taking a leading role in their organization and final disbanding in 1886. Deeply conservative in his social views, Degas disliked the term “Impressionism” that was popularly attached to the group as much as he disliked and mocked painting “en plein air” like Monet and others did, writing “You know what I think of people who work out in the open. If I were the government I would have a special brigade of gendarmes to keep an eye on artists who paint landscapes from nature. Oh, I don’t mean to kill anyone; just a little dose of bird-shot now and then as a warning.”

He was very much, however, an Impressionist in painting the reality of the Parisian world around him with a strong sense of immediacy, using blazing and luminous colours, the force of light, and off-centre compositions. By the late 1860s women became Degas’s source of inspiration, and conforming to contemporary ideas, Degas painted hard-working women like milliners and laundresses, but women entertainers as well, like Ballet Dancers and Singers.

The Singer with a Glove is one such painting. Using the harsh artificial light needed to illuminate the stage of the famous Parisian Café Chantant, maybe his favourite Café des Ambassadeurs, Degas presents the singer as she holds an operatic note holding her gloved hand up to stress her effort! He uses harsh light and strong colours… shades of orange, washes of pink and green, stark black and pure white. Degas uses light and colours to dominate his composition and create… drama needed to stress new values for France’s newly established Third Republic!

Bibliography on Degas is extensive and interesting. For easy access to Internet short articles on the painting in focus, please go to https://www.harvardartmuseums.org/art/228652    and    https://fashionhistory.fitnyc.edu/1884-degas-singer-in-green/    and    https://en.wikipedia.org/wiki/Edgar_Degas#cite_note-26

For a student Activity on the painting of the Harvard Art Museums Singer with a Glove by Edgar Degas, please… click HERE! 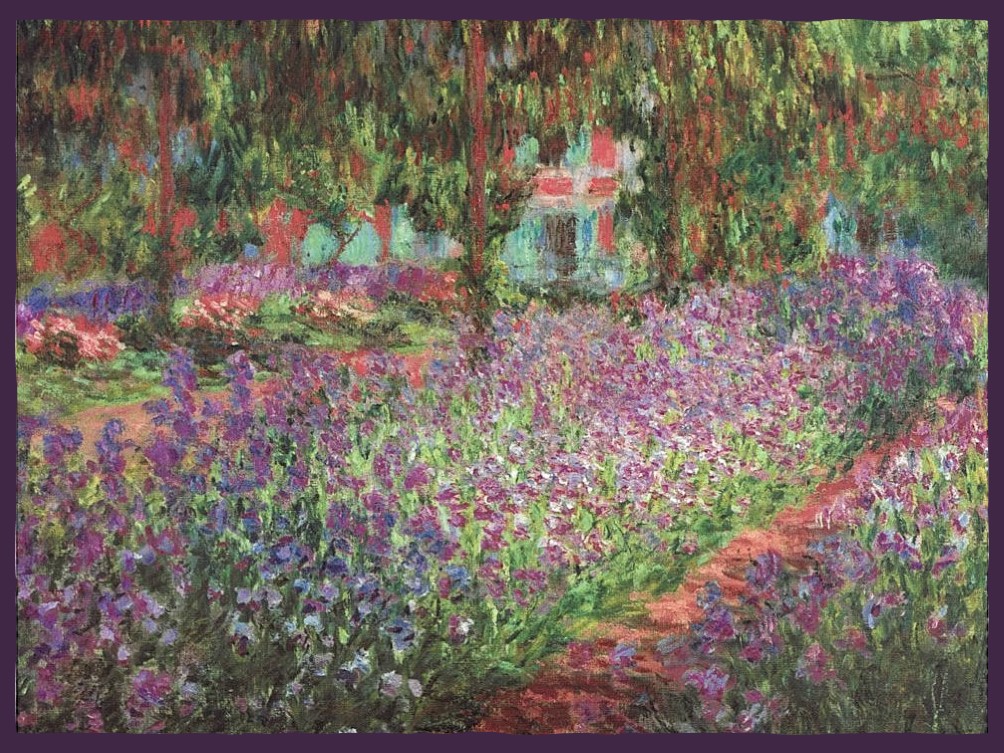 Our Spring Break Virtual Destination is very specific, a small FRENCH village called Giverny. This is where the great master of Impressionism, Claude Monet lived… Stay in the comfort of your HOME! Snack on something deliciously FRENCH! …and ACTION!

Let’s start our GIVERNY TOUR by bringing the beauty of SPRING into our Life with a VIRTUAL TOUR of Monet’s House at Giverny, where he created his famous Waterlilies Paintings https://fondation-monet.com/visite-virtuelle/

The following Video is an interesting Claude Monet Biography

Walking through Monet’s Giverny House you noticed how beautifully each room was decorated with Ukiyo-e Japanese  Prints. This “exotic” art form greatly influenced Impressionist Art creating new energy and incorporating enormous innovation. Let’s use our imagination as a time machine, and follow Monet up when he says “Admirable… Hiroshige is a marvellous impressionist. Me and Rodin are filled with enthusiasm.… these Japanese artists confirm to me our visual position”. Enjoy a PowerPoint I prepared for my Art through the Ages students titled Impressionism and Japonism. https://drive.google.com/file/d/1a5HSUHJtNxV3LjLNLj2X8ovf86ly6_-b/view?usp=sharing

Movie Time in FRANCE of Impressionism …and more ACTION!

Exhibition on Screen: I, Claude Monet… Monet’s life… his sun-dazzled canvases and his feelings, as his art developed and his love of gardening led to the glories of his Giverny garden. His humour, insight and love of life are revealed and explored in this wonderful film… https://exhibitiononscreen.com/films/i-claude-monet/ and

Renoir… Set on the French Riviera in the summer of 1915, Jean Renoir – son of the Impressionist painter Pierre-Auguste – returns home to convalesce after being wounded in World War I. At his side is Andrée, a young woman who rejuvenates, enchants, and inspires both father and son. Rated R. https://www.imdb.com/title/tt2150332/ and

The Impressionists, a BBC Docudrama… “Three-hour mini-series tells the intimate history of the most illustrious brotherhood of Impressionist artists – Monet, Degas, Renoir, Cézanne and Manet. Entirely based on documentary evidence, special effects transport the viewer inside some of the world’s best-loved paintings, The Impressionists will recreate the illuminated landscapes, and haunting portraits of late 19th-century France.” https://www.imdb.com/title/tt0496201/

FOR those, much YOUNGER… An Art Activity… to exhibit Creativity!

The Monet Cookbook: Recipes From Giverny... Claude Monet has become almost synonymous with his series of paintings of water lilies! Did you know that he was also a genial host and a food-loving gourmand? Monet “appreciated simple dishes made of fresh ingredients and prepared according to very basic yet authentic principles,” writes Florence Gentner, a museum consultant and author, most recently of The Monet Cookbook: Recipes From Giverny. https://www.amazon.com/Monet-Cookbook-Recipes-Giverny/dp/3791382888 and a wonderful Youtube video I highly recommend with Monet Recipes…

If in the mood for music, here are… The 9 Greatest French Chanson Songs https://theculturetrip.com/europe/france/articles/les-belles-chansons-fran-aises-classic-french-chanson-songs/ 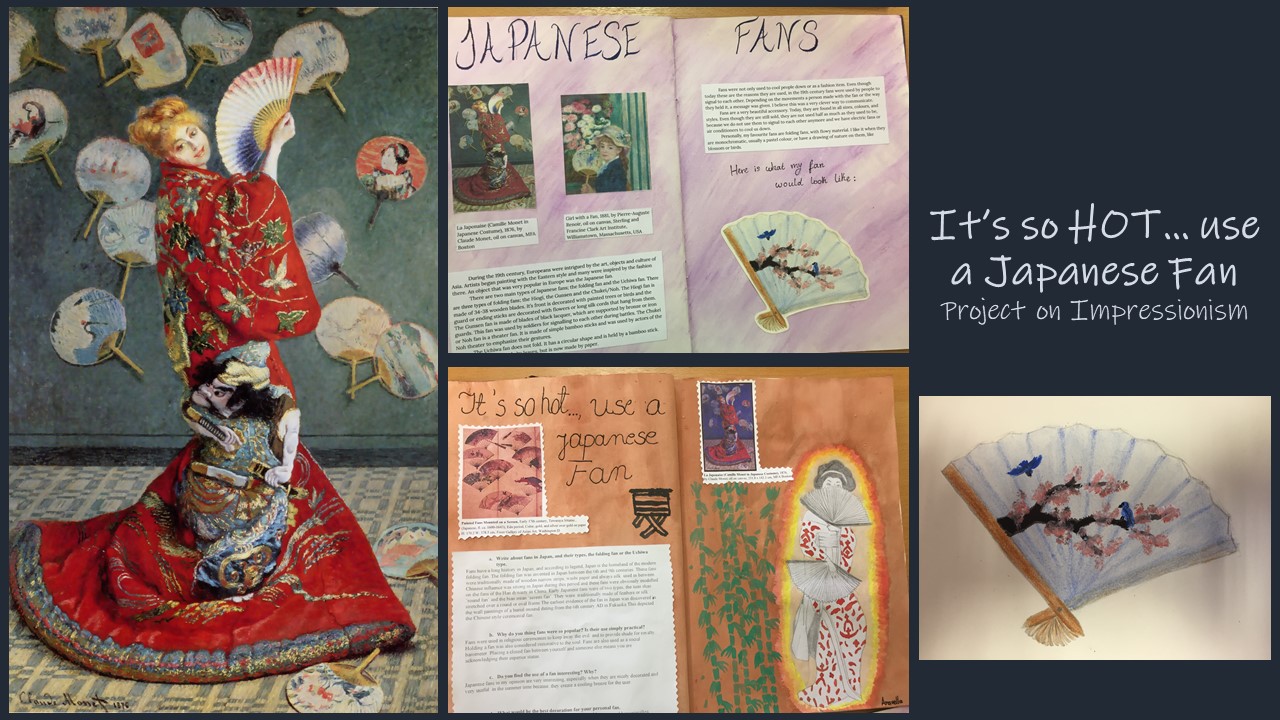 How the West met the East and how Impressionism was influenced by Japanese Art!

My Summative Projects, I call them RWAP (Writing Research Art Project), ask students to focus on 4 parts: 1. Write a well thought Project Title 2. Provide colored copies of at least 2 artworks related to their Project, correctly identified. For the correct identification, I expect them to write the name of the artist (if known), the title of the work, date, medium, and current location, 3. Prepare the required Writing Assignment, 4. Do the Art Assignment which is open to student imagination and creativity.

For the Impressionism and Japonism RWAP Project students are asked to Investigate Impressionism and Japonism, and how the first was influenced by the second. Students are asked to focus on Monet’s painting La Japonaise exhibited in 1876, and attracting a lot of attention, of his wife Camille, dressed in a fine kimono, in front of a background of Japanese Uchiwe fans.

Impressionism and Japonism: the Activity

Students are further asked to read on Monet’s La Japonaise:

For Painted Fans Mounted on a Screen Read:

The Writing Assignment for this RWAP on Impressionism and Japonism is to write about: A. A paragraph on fans in Japanese culture and art, the folding fan or the Uchiwa type, B. Why were fans so popular then? Was their use simply practical? How else were fans used by both men and women? Students can write about the use of fans in Japanese or European culture.

For student Art Assignment I can only suggest… decorate the pages of your RWAP Sketchbook, like Monet, with Uchiwa fans a or dazzle us with something glitzy like the Edo Screen. Most important… Be imaginative, Creative, Original!!!

June in Greece is so hot…, I use a Japanese Fan!!!