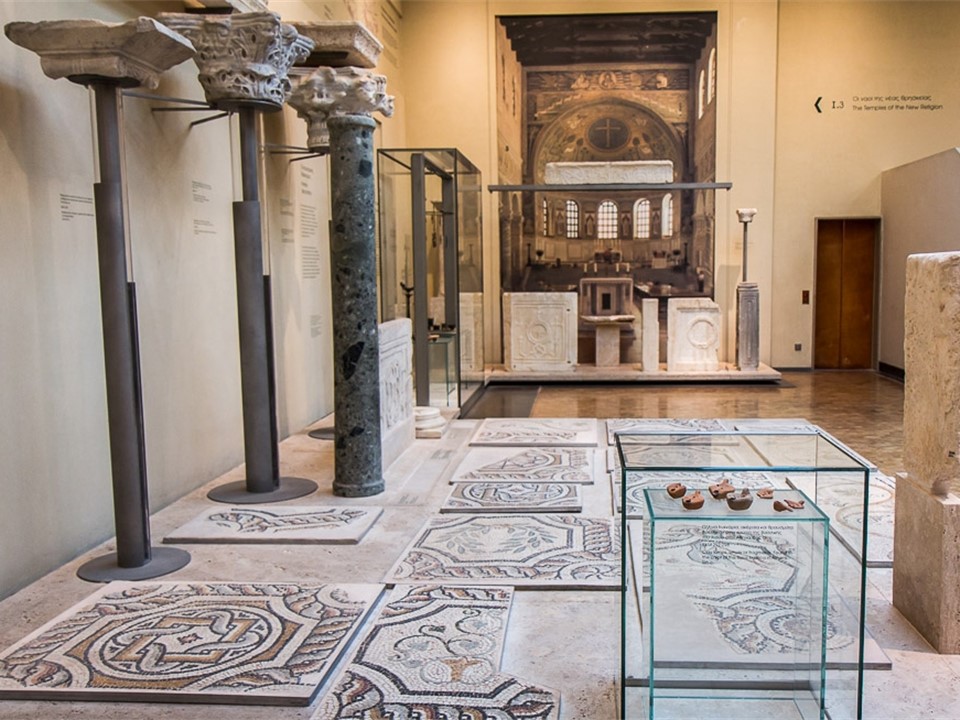 Ilissos Basilica is one of the most important Early Christian monuments in the city of Athens… today, a “sad” archeological site, hardly anyone visits. Back in 1916 and 1917, George Sotiriou. a prominent scholar in the field of Christian Archaeology, excavated the area, discovered the Basilica and the lovely mosaics that are now exhibited in the Byzantine and Christian Museum in Athens. The Basilica was originally built on an islet in the middle of  Ilissos river (the islet was known as Βατραχονήσι – Frog Island)… located to the east of the Olympieion, popularly called today, the Columns of the Olympian Zeus, a colossal Athenian Temple that started during the 6th century BC, at the time of the Athenian tyrants, and finished by the Roman Emperor Hadrian in the 2nd century AD, 638 years later. The fifth-century Basilica was dedicated to Saint Leonides, the third-century Bishop of Athens who was put to death along with seven female martyrs… in 250 AD during the persecutions of Decius.https://athensattica.com/things-to-see/ancient-sites/ilissos-basilica/ and http://www.byzantineathens.com/betaalphasigmaiotalambdaiotakappaeta-iotalambdaiotasigmasigmaomicronupsilon.html

The Ilissos Basilica was probably founded in the years 423-450 by the Byzantine Empress Athenais-Eudocia, wife of the Emperor Theodosius II and Sotiriou excavations of 1916/17 revealed a Basilica of the transitional type – from the simple, timber roofed to the domed basilica. Excavations also brought to light a crypte-martyrium, where Leonides’ relics were kept, and another edifice, a baptisterium, in all probability for the needs of the growing Christian group of Athenian citizens. The basilica, according to the experts, was very carefully built and richly decorated with marble walls, mosaics, and sculptures. This Early Christian monument of Ilissos properly fills the gap in the continuous artistic and cultural evolution of the city of Athens. https://www.archaeology.wiki/blog/issue/the-early-christian-basilica-of-ilissos/

The group of mosaics, coming from the Ilissos Basilica and exhibited in the Byzantine and Christian Museum in Athens are of exceptional quality combining the best of Roman and Christian floor mosaic traditions. Inspired by the Roman tradition, the Ilissos Basilica mosaics show decorative features such as interlace in the form of chains (“guilloche”), stylized round flowers (rosettes), trailing ivy, motifs resembling fish scales and water birds. The Early Christian designs exhibited are vine scrolls from which hang bunches of grapes and vine leaves (symbol of the Christian Paradise), wreaths of laurel leaves (a well-known symbol of victory from Roman times), small crosses, and other geometrical and plant motifs. The 5th-century artist who designed these mosaics was a master colourist who favoured gentle hues of white, black, deep red, orange, grey, pale violet, brown, yellow, pink, blue and green. His drawing technique also showed an artist who liked discreet and charming lines, light touch, and great care in arranging the tesserae to follow the outlines. https://www.byzantinemuseum.gr/en/permanentexhibition/ancient_world_to_Byzantium/temples_of_the_new_religion/?bxm=1753

For a PowerPoint on the Mosaics from the Ilissos Basilica in Athens, please… Check HERE! 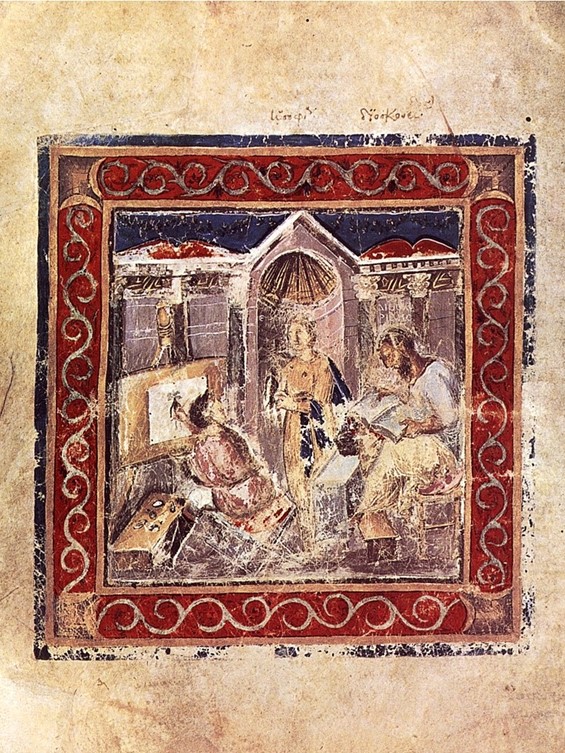 “The Vienna Dioscurides is a Byzantine Greek illuminated manuscript copy of “Medical Material” by Dioscorides, which was created in 515 AD. It is a rare surviving example of an illustrated ancient scientific and medical text… The original “De Materia Medica” or “On Medical Material” was first written between 50 and 70 CE by Pedanius Dioscorides. It is a pharmacopeia of medicinal plants and was widely read and used for more than 1,500 years… This specific manuscript copy was created in the Byzantine Empire’s capital, Constantinople, for the byzantine imperial princess, Anicia Juliana. She was the daughter of Anicius Olybrius, who had been one of the last Western Roman Emperors… The manuscript was presented to the princess in gratitude for her funding the construction of a church… The dedication miniature portrait of Anicia Juliana is the oldest surviving dedication portraits in a book…” I couldn’t better encapsulate the manuscript’s identification. The Vienna Dioscurides is one of the “canvases” I use for my Course on Cultural Geography of Greece and specifically my Lessons on popular Greek Plants like Dioscurides and Krithamo.     https://joyofmuseums.com/ancient-manuscripts-and-historically-influential-books/vienna-dioscurides/

Anicia Juliana (462 – 527/528 AD)was an incredible woman, a prominent member of the up-to-date ruling Roman Imperial Dynasties. She was the daughter of Emperor Anicius Olybrius of the Western Roman Empire, the wife of the Magister Militum of the Eastern Roman Empire, Areobindus Dagalaiphus Areobindus and the mother of  Olybrius Junior, a Roman Consul. Anicia Juliana was the wealthiest woman in the Roman Empire and the greatest patron of the Arts at the time. She is the ktitorissa of religious edifices, the Church of Hagios Polyeuktos in Constantinople, built by the year 527, the most sumptuous of all,  and the recipient of a magnificent manuscript, a copy of De Materia Medica by Dioscurides, known today as Vienna Dioscurides. https://www.thebyzantinelegacy.com/anicia-juliana

Pedanius Dioscurides (c. 30-90 AD) was a Greek physician, pharmacologist and botanist who served in the Roman army of Emperor Nero during the1st century AD. He was a native of Anazarbus in Asia Minor and studied medicine at the nearby school in Tarsus. Following the Roman Army, Dioscurides collected information and samples of local medicinal plants and about 70 AD he published De Materia Medica, a five volumes treatise on the “medicinal properties of over one thousand natural medicinal substances; most of these… botanical in origin, but drugs of animal and mineral origin…” as well. The book’s subtitle, “On the Preparation, Properties and Testing of Drugs, sets the empirical, scientific tone of this work… Dioscorides didn’t accept anything on faith, or on the reputation of established authorities; he checked everything out and tested every drug clinically.  He personally travelled and researched the local folk medicine uses of every herb… The presentations of every herb and medicinal substance in Dioscorides’ herbal were very thorough.  It included plant names, synonyms and illustrations; plant habitat and botanical descriptions; properties, actions and uses of the drug; negative side effects if any; administration and dosage recommendations; directions on harvesting, preparation and storage of herbs or drugs…” One can only admire the painstaking work done by Dioscurides and the reasons why De Materia Medica “has been the prime authority and source work on herbs and other medicinal substances in the history of Western Civilization, and quite possibly in the history of the world.”     http://www.greekmedicine.net/whos_who/Dioscorides.html

Simply put… the Vienna Dioscurides is one of the most beautiful Byzantine Manuscripts in the world! The c. 512 AD Codex, written in vellum folios and magnificently illuminated, was created in a workshop in Constantinople, and granted, as a gift of gratitude, to the Imperial Princess Anicia Juliana for her patronage in the construction of a church in the quarter of Honoratae. The Vienna Dioscurides is one of the “canvases” I use for my Course on the Cultural Geography of Greece and specifically Lessons on popular Greek Plants like Dioscurides and Krithamo. Please CHECK my POWERPOINT HERE! for pictures of manuscript folios and interesting FACTS about it.

Crithmum Maritimum, according to Dioscurides, Krithamo and Rock Samphire today, grows on rocky beaches where there is a little sand and strong, salty winds. This is one of the plants presented in the Constantinopolitan Codex of Anicia Juliana, described as having detoxifying properties, good to treat liver, intestinal and renal dysfunction. Dioscurides refers to it as “λαχανεύεται εφθόν τε και ωμόν εσθιόμενον, και ταριχεύεται εν άλμη.” I use the illumination of Crithmum Maritimum in Dioscurides’s manuscript in my Cultural Geography of Greece Class to discuss the Plant’s characteristics and create an Inter-Disciplinary Activity my students enjoy doing… as you can see HERE! for the Activity’s instructions and HERE! and HERE!  for samples of student work.     https://www.itrofi.gr/fytika/votana/article/1623/kritamo-votano-toy-gialoy-poy-dynamonei-anosopoiitiko-kai-einai-gemato 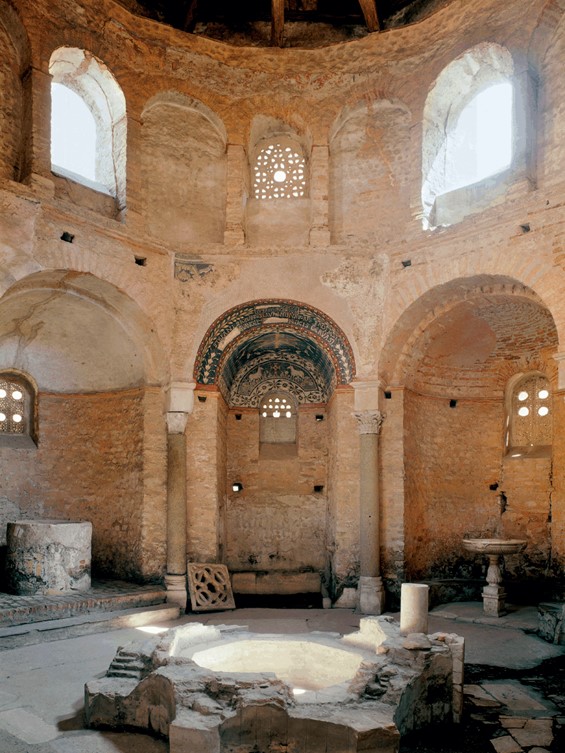 “Early Christian Baptisteries were more than simply convenient shelters for liturgical rites. They functioned as symbols in themselves; their shape and decoration reflected and reinforced the theological significance or meaning of the ritual. Whereas the shapes and their furnishings were specially built to accommodate a complex ceremony having regional and indigenous variations, certain details of their design were intended to express the meaning and purpose of the rite…” writes R. Jensen in his 2010 book Living Water. The Albenga Baptistery intends to briefly explore a magnificent example of Early Christian Baptistery Architecture.    https://brill.com/view/book/9789004189089/Bej.9789004188983.i-306_008.xml

Albenga is an old Italian city with a rich history. Built on the Gulf of Genoa, in the province of Savona in Liguria, Albenga is charmingly nicknamed, City of a Hundred Towers. During the Roman period, Albenga was a busy port town called Albium Ingaunum. Interestingly, the city’s ancient Roman structure survived time, and today, the two Roman main streets, the “Cardo” and “Decumanus” intersect at its modern centre. The city is also famous for the wreck of the Roman ship, exhibited in the Naval Museum. This  Marine Archaeology find is the “largest Roman transport vessel known to date in the Mediterranean, with a load exceeding 10,000 amphorae, and therefore with a net capacity of 450/500 tons. The amphorae contained wine from Campania destined for the markets of southern France and Spain. Along with wine, black-glazed ceramics…” and other types of export pottery were discovered as well.  https://www.scoprialbenga.it/en/roman-naval-museum.htm     In addition to Roman ruins, Albenga boasts splendid Early Christian and Medieval monuments like the city’s 12th-century Cathedral, the famous early 6th-century Baptistery we will further discuss, and “hundred” of Medieval Towers.

The Albenga Baptistery was built during the early sixth century AD, when the city, following a perilous period of unrest, was reconstructed by Emperor Flavio Costanzo in his attempt to rebuild the Roman Empire. The Albenga Baptistery can be described as an octagonal room with a baptismal font in the middle and “inner walls articulated in two arcades, one above the other, and originally covered by a dome.” The lower arcade presents eight arches followed by niches, one of both on each of the eight walls. Each niche has a semicircular or rectangular ground plan and a small window for illumination. “Two of the niches, to the south-west and the south-east, have doors connecting the octagonal room with the outside.” The Baptistery’s upper arcade has sixteen arches, seven of which are large windows, one smaller in size, and the rest of the arches, in between windows, simply closed. Interestingly, “while the octagonal shape dominates the inside of the building and also the outside of the upper part, the thicker, lower part has an irregular, decagonal outer shape, probably in order to adapt to surrounding buildings of which little is known.” Bottom line, this is an ambitious Early Christian architectural project “realized through important economic and architectural efforts.”          https://www.academia.edu/14528427/Photomodelling_as_an_Instrument_for_Stratigraphic_Analysis_of_Standing_Buildings_the_Baptistery_of_Albenga_con_Cristian_Aiello_Federico_Caruso_Chiara_Cecalupo_Elie_Essa_Kas_Hanna_in_Rivista_di_Archeologia_Cristiana_90_2014_pp_259_293

The Baptistery’s interior was, it is believed, decorated with a bold mosaic pictorial program that covered, most probably, the niches, the walls and the pavement surrounding the baptismal font of the Baptistery. Today, the only part covered with mosaics is the barrel vault over the northeastern interior niche. Reading Nathan S. Denis’s Visualizing Trinitarian space in the Albanga Baptistery, we learn that “the early sixth-century baptistery in Albenga, Italy, contains one of the earliest attempts to render the Christian Trinity in pictorial form.”

This mosaic is made of two parts. The bigger part of the two presents “a tripartite group of interlocking Chi-Rho monograms imprinted upon an equally tripartite gradient-blue nimbus” of golden-yellow and white marble tesserae for the Chi-Rho and a circular field of light-blue glass mosaic for the nimbus. “Surrounding the monogram are twelve white doves; immediately above the monogram is a small orb containing a golden cross; and… eighty-six eight-pointed white stars against a deep, lapis-coloured background…” The smaller of the two is on the lunette above the window and shows two lambs flanking a jewelled cross in a paradisiacal landscape of green and blue background.

Both compositions are framed by a thick rinceaux border on a striking white background. There is a second border, both geometric and floral, on the underside of the window arch flanking a white anchor, and again, over the entrance to the niche, flanking an inscription that reads “NOMINAMVS QVORVM HIC RELIQVIAE SVNT,” or “We call upon [them] whose relics are here.” The inscription is accompanied by the names of  “Sts. Stephen, John the Evangelist, Lawrence, Nabor, Protasius, Felix, and Gervasius, with the two missing names on the lowest register generally believed to have been St. Victor and Sixtus I.”