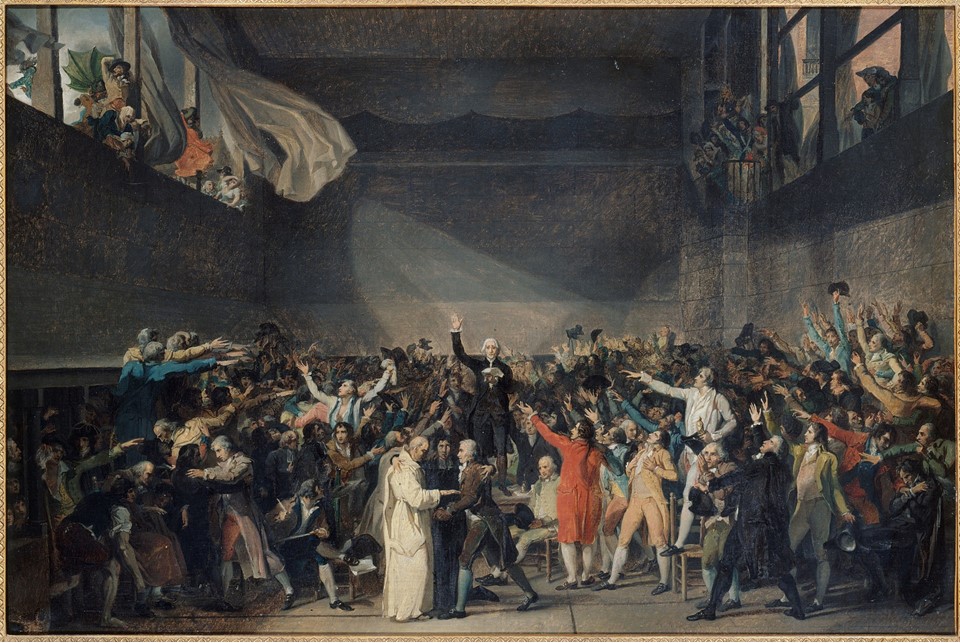 One of the two representations of the historic The Tennis Court Oath by Jacques-Louis David is exhibited in the Musée Histoire de Paris Carnavalet. The Museum experts describe the painting as… An emblematic work of the revolutionary period, this historical representation illustrates a key moment in 1789: “the year without equal”. While the States General have been gathered in Versailles since their convocation on May 5, the debates trample around an essential issue: that of deliberation by order or by head. Soon, the elected officials of the third estate formed a National Assembly and were joined by the majority of those of the clergy, then by a very active minority of gentlemen. Gathered in a tennis court near the royal palace following a ban on sitting, the deputies of the Nation solemnly swear not to separate before having established a Constitution. The oath, read by the President of the Assembly Jean-Sylvain Bailly, is signed by all representatives except one, whose freedom of opinion was respected. The actors, none of whom are turning their backs, seem to play their role as on a stage. But this is the theater of history… https://www.carnavalet.paris.fr/collections/serment-du-jeu-de-paume-le-20-juin-1789

David’s canvas at Carnavalet’s Museum is unfinished, just a step in colour, compared to the sketch in Versailles, of the same theme, and few preparatory drawings. The importance of the theme is momentous. David was commissioned to do a huge painting on the Oath of the Jeu de Paume, held in Versailles on June 20, 1789, by the Society of Friends of the Constitution. His aim was to represent very recent history, and real people in contemporary costume, thus posing a real challenge to the public traditional history painting. This drawing was exhibited in the Salon of 1791 with the intention to raise money and finance, at first, an engraving and in the end, the final painting of the historic Tennis Court Oath, which, unfortunately, was never completed. David’s drawing entered the Louvre collection in 1886 and on April 5, 1939, was deposited at the Versailles Museum, where is currently exhibited. http://collections.chateauversailles.fr/#310a5e1d-d66e-4101-8358-463f4746b06a and https://en.chateauversailles.fr/discover/estate/royal-tennis-court

The artist of both artworks, Jacques-Louis David, is the finest representative of Neoclassicism in At and one of the most important French artists of all times. Seeking inspiration in the work of Nicolas Poussin and antiquity, David gained immediate success when in 1785 he displayed,  at the Parisian Salon, his painting Oath of Horatii, a portrayal of his artistic and political beliefs… classical and revolutionary to their core. David proceeded in painting the important events of the French Revolution, right from its very beginning… the Tennis Court Oath taken by the Third Estate, Marie Antoinette led to her Execution and his most influential revolutionary painting of all, The Death of Marat in 1793.