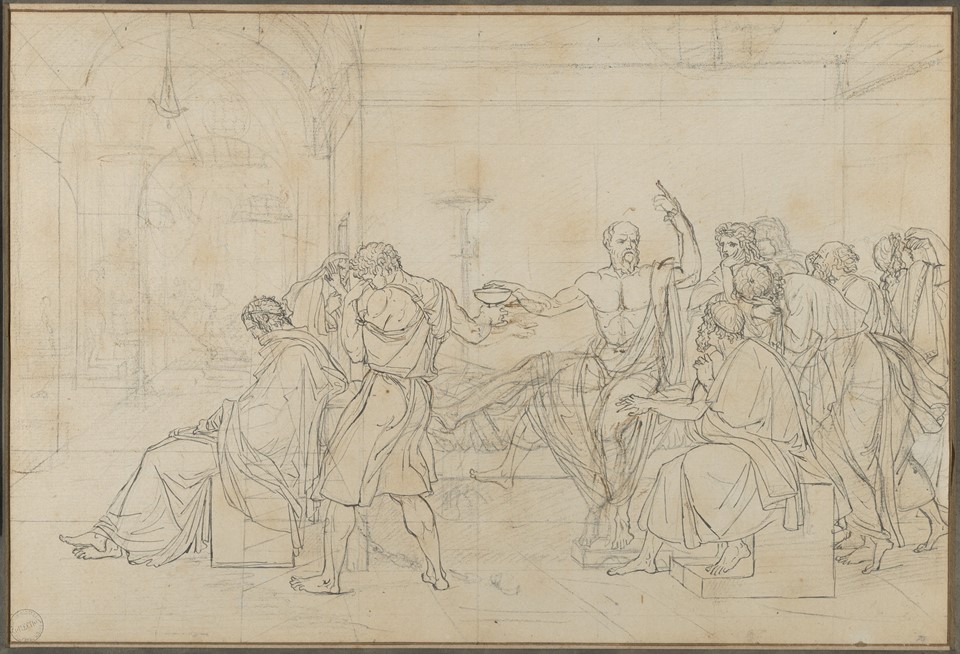 Jacques Louis David: Radical Draftsman (February 17 – May 15, 2022 – the MET, NY) is the first exhibition devoted to works on paper by the celebrated French artist who navigated vast artistic and political divides throughout his life – from his birth in Paris in 1748 to his death in exile in Brussels in 1825. His iconic works captured the aspirations and suffering of a nation, while addressing timeless themes that continue to resonate today. Among the works exhibited at the MET, in New York City, The Death of Socrates by Jacques Louis David, a most delicate and fragile drawing of 1786, is a priceless treasure in the collection of the Metropolitan Museum. Every time I see the drawing or the oil painting of the same theme, I remember my senior High School year… reading The Apology of Socrates by Plato, on the quest for Wisdom, on piety and the corruption of youth… and the acknowledgment that philosophy begins with an admission of ignorance. https://www.metmuseum.org/exhibitions/listings/2022/jacques-louis-david-radical-draftsman and http://www2.hawaii.edu/~freeman/courses/phil100/04.%20Apology.pdf

In 1786, on the verge of the French Revolution, Jean Charles Philibert Trudaine de Montigny, French administrator, scholar, and scientist, commissioned David to paint The Death of Socrates, a theme inspired by a pivotal moment in ancient Greek history, when the ideals of Athenian Democracy were questioned and challenged. David was fascinated by Antiquity, Greek or Roman. The recipient of the coveted Prix de Rome, the artist first traveled to Italy in October 1775. By 1786, he was familiar with the dynamics of Classical Art, and although he declared, the Antique will not seduce me, it lacks animation, it does not move, he kept twelve sketchbooks with drawings of antique sculptures that he and his studio used as model books for the rest of his life. He was also acquainted with the German artist Raphael Mengs, who advocated the rigorous study of classical art. He was familiar with the writings of the German scholar, and many considered to be the founder of modern Art History, Johann Joachim Winckelmann, and in 1779, had visited the ruins of the newly discovered city of Pompeii. David, a great admirer of the High Renaissance, Raphael in particular, and Classical Culture was ready to render a theme of ancient Greek origin, The Death of Socrates, and do it justice. https://www.biography.com/artist/jacques-louis-david

Two drawings on paper, one in the Metropolitan Museum and the other in a Private Collection, testify to the fact that David was intrigued by the circumstances of Socrates’s Death, as early as 1782. Both these drawings were a starting point for the final version of the theme, an impressive oil painting,  dated 1787, in the MET Collection as well. https://www.metmuseum.org/art/collection/search/436105

Thanks to the MET Exhibition Jacques Louis David: Radical Draftsman, we can closely examine David’s 1786 preparatory Drawing of the theme of Socrates’s Death. Perrin Stein, an expert on the subject par excellence, emphasizes how David’s drawing in the MET,  is a working drawing, that sheds light on the artist’s main concerns. For example, the perspective lines in the lower left recede toward a vanishing point just above the head of Plato, the somber figure seated at the foot of the bed. In this subtle way, Perrin Stein explains, David calls attention to the special role of Plato, who was not present in Socrates’ prison cell, but who described the scene in Phaedo, one of his Dialogues. Another interesting feature is Socrates’s gesture toward the heavens which suggests that Socrates’s final moments were spent describing to his disciples his notions on the immortality of the soul. It is also interesting to note the ancient lyre, lightly sketched, just behind Socrates’s right leg. The musical instrument in David’s drawing figures—metaphorically—in Plato’s text as a proposed analogy for the relationship of the human soul (music) to the body (instrument). Finally, it is important to notice the many visible pentimenti, or changes, in the disciple’s hand holding the cup, in Socrates’s hand pointing up, and in both of Socrates’s legs, all indications of the artist’s exacting focus on the nexus of forms and gestures that would become the resonant and haunting focal point of the final oil painting.

For a  PowerPoint on Jacques-Louis David’s The Death of Socrates, please… Click HERE!

An interesting MET Video titled: “What is the path to a masterpiece?” by Dr. Perrin Stein, who presents and analyzes the dynamics of  Jacques Louis David’s The Death of Socrates drawing… https://www.youtube.com/watch?v=FgWouRo_1hw

The Legacy of Jacques Louis David (1748–1825) is a short MET presentation worth reading… https://www.metmuseum.org/toah/hd/jldv/hd_jldv.htm