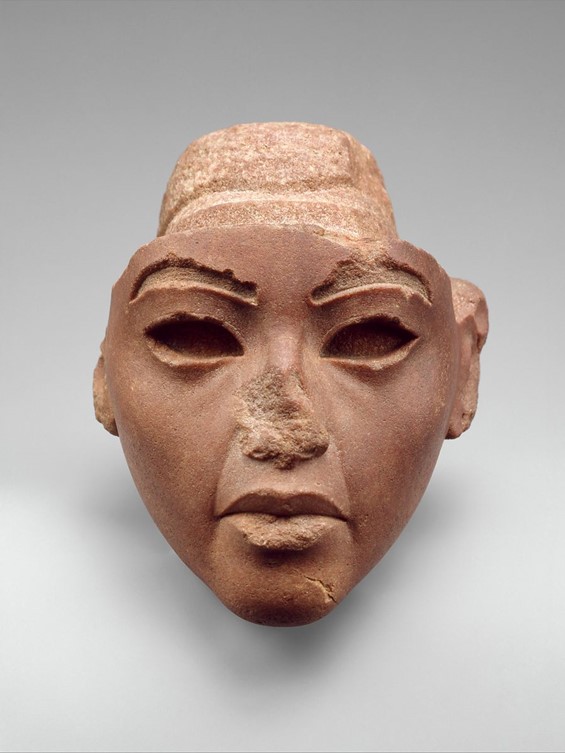 “The long-lost mummy of The Formidable Queen Tiye has been found. Wife of Amenhotep III, mother of Akhenaten, and grandmother of Tutankhamun (?), she has been lurking undetected, virtually under the noses of the Egyptologists, for more than 75 years until Professors Edward P Wente of the Oriental Institute and James R. Harris of the University of Michigan made their spectacular discovery.

The road to the discovery really began in 1898 when the French archaeologist V. Loret came upon three nameless bodies in a side chamber of Amenhotep II’s tomb in the Valley of the Kings. One of these was of a middle-aged woman. Despite the passage of thousands of years her well-preserved face still wore a striking, haughty look, and her head was covered with long, curly, brown hair, that lent a certain sensuality to her face. But there was no clue to the identity of the woman.

Tutankhamun’s tomb was discovered in 1922. In that tomb, in one of a series of miniature coffins, was a lock of Queen Tiye’s hair, deposited as an affectionate memento to accompany the young king on his journey into the beyond. The connection between these two discoveries was overlooked until very recently when Professors Wente and Harris began to prepare a book on the royal mummies of ancient Egypt. While grappling with the problem of the unidentified woman, the idea occurred to them that she might be Queen Tiye. How could they be sure? The lock of hair buried with Tut came to mind, and scientific tests comparing the lock and the mummy’s hair proved beyond doubt that the two belonged to the same person. Queen Tiye was found – and through a discovery of a refreshing degree of certainty. file:///C:/Users/aspil/OneDrive/Blog/Egypt/Queen%20Tiye%20Found.pdf

I love rereading the October 1976 article on the discovery of Tiye’s mummy in the Oriental Institute’s News & Notes (No. 30). Even more so today, as I prepare the presentation of one of my favourite sculptural portraits of Queen Tiye exhibited in New York, at the Metropolitan Museum of Art. https://oi.uchicago.edu/sites/oi.uchicago.edu/files/uploads/shared/docs/nn30.pdf

When I think of Queen Tiye, I think of Egypt’s golden age, a successful Pharaoh of the 18th Dynasty, Amenhotep III (1391–1353 or 1388–1351 BC), a sizeable and prosperous empire, great wealth from Nubia and the Levant, and a new era of monument building and artistic expression. I also think of a formidable lady whose influence on the Pharaoh grew stronger over the years. It is interesting how in official statues of the royal couple, she and Amenhotep are the same height, symbolizing a relationship of equals.https://www.nationalgeographic.com/history/history-magazine/article/king-tut-grandparents-tiye-amenhotep-egypt-royal-couple

The quartzite head of Queen Tiye in the Metropolitan Museum, in New York, dates from the time of Akhenaten’s reign and it seems to be a statue commemorating the Pharaoh’s (Akhenaten’s) royal family in the new “Amarna” style. The sensitive modeling of the face is typical of the workshop of the sculptor Thutmose at Tell el-Amarna and the existence of gypsum plaster casts excavated in Thutmose’s studio suggests that this portrait may have been part of a group statue depicting Akhenaten with his parents, Tiye, and Amenhotep III. The New York portrait shows an imperious, authoritative, and clever woman realistically rendered yet respectful to her maturity. Tiye’s life is an intriguing chapter in Egyptian history, and the MET’s portrait, scared and broken, intrigues me as well… https://www.metmuseum.org/art/collection/search/544693?searchField=All&amp;sortBy=Relevance&amp;high=on&amp;ao=on&amp;showOnly=openAccess&amp;ft=*&amp;offset=0&amp;rpp=80&amp;pos=61 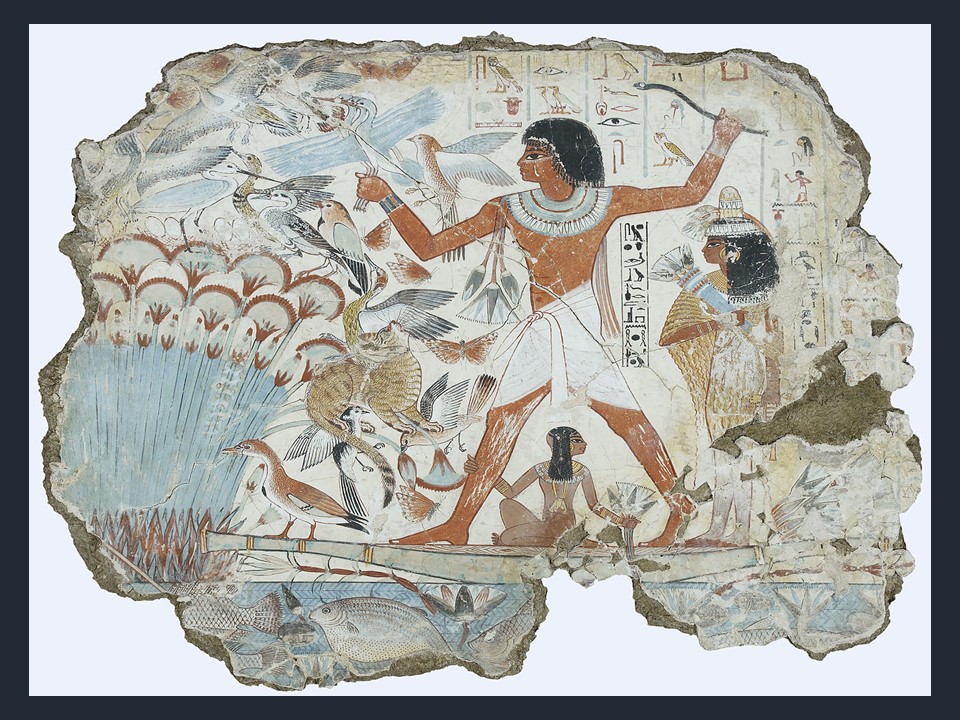 Among the many treasures exhibited in the British Museum is a set of 11 frescoes from the tomb of an Egyptian official called Nebamun who lived in the ancient city of Thebes during the 18th Dynasty circa 1325 BC. He was an educated man, a scribe, and an administrator in charge of grain collection for the Temple of Amun at Thebes. His Tomb, discovered in the Theban Necropolis, on the west bank of the Nile, present-day Luxor, was richly decorated with high-quality frescoes depicting scenes of Nebamun and his family engaging in everyday life activities like hunting, attending a banquet and overseeing a count of geese and cattle.

The British Museum frescoes of Nebamun’s Tomb were discovered back in 1820 by a young man called Yanni d’Athanasi, who was at the time working for Henry Salt, the British Consul-General and collector of Antiquities. The Tomb, its location unknown today, was probably badly destroyed by d’Athanasi’s team of tomb robbers. The frescoes, however, were sold to Henry Salt and then, in 1821, by Salt, to the British Museum. Since 2009, beautifully restored, the frescoes have been displayed in a new gallery at the British Museum.

For an interesting 3D interactive animation of the tomb-chapel of Nebamun check… https://www.britishmuseum.org/visiting/galleries/ancient_egypt/room_61_tomb-chapel_nebamun/nebamun_animation.aspx

Student Activity on the Tomb of Nebamun frescoes can be found if you… Click HERE!