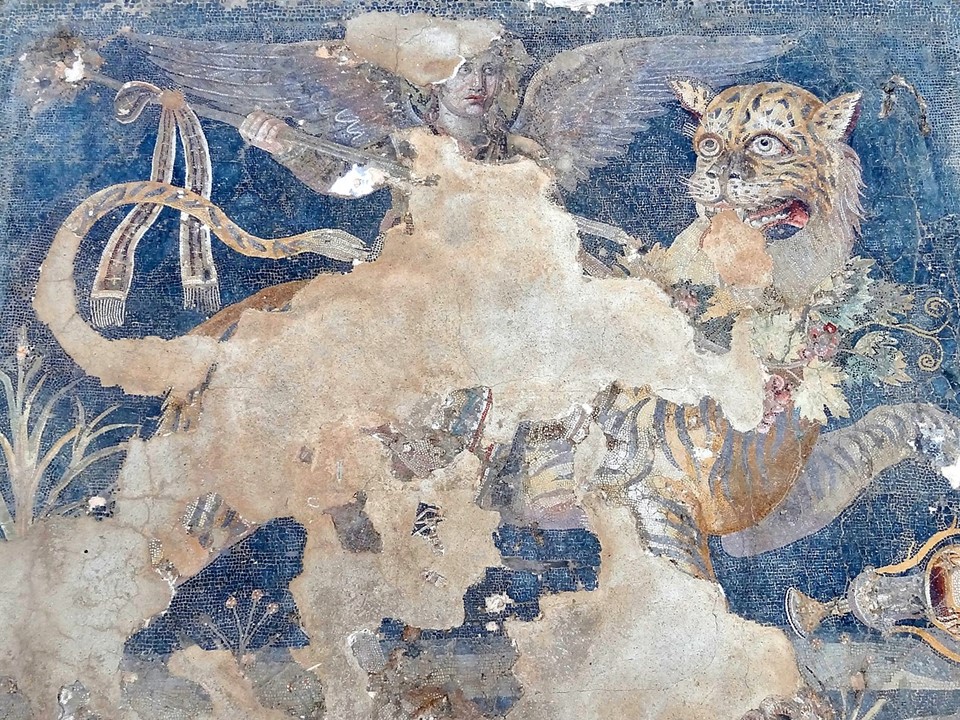 In Euripides’s Bacchae, it is Teiresia’s role, addressing Pentheus, to introduce Dionysus to the audience, just like the Epiphany of Dionysus Mosaic in Delos does… visually! …You have a rapid tongue as though you were sensible, but there is no sense in your words… [270] This new god, whom you ridicule, I am unable to express how great he will be throughout Hellas. For two things, young man, [275] are first among men: the goddess Demeter—she is the earth, but call her whatever name you wish; she nourishes mortals with dry food; but he who came afterward, the offspring of Semele, discovered a match to it, the liquid drink of the grape, and introduced it [280] to mortals. It releases wretched mortals from grief, whenever they are filled with the stream of the vine, and gives them sleep, a means of forgetting their daily troubles, nor is there another cure for hardships. He who is a god is poured out in offerings to the gods, [285] so that by his means men may have good things! http://www.perseus.tufts.edu/hopper/text?doc=Perseus%3Atext%3A1999.01.0092%3Acard%3D266

There is no easy way to describe God Dionysus. The Homeric Hymns 26 on Dionysus is, I believe, a wonderful introduction… [1] I begin to sing of ivy-crowned Dionysus, the loud-crying god, splendid son of Zeus and glorious Semele. The rich-haired Nymphs received him in their bosoms from the lord his father and fostered and nurtured him carefully [5] in the dells of Nysa, where by the will of his father he grew up in a sweet-smelling cave, being reckoned among the immortals. But when the goddesses had brought him up, a god oft hymned, then began he to wander continually through the woody coombes, thickly wreathed with ivy and laurel. And the Nymphs followed in his train [10] with him for their leader; and the boundless forest was filled with their outcry.    /    And so hail to you, Dionysus, god of abundant clusters! Grant that we may come again rejoicing to this season, and from that season onwards for many a year. The Homeric Hymns 26 on Dionysus is, I believe, a wonderful introduction! https://www.perseus.tufts.edu/hopper/text?doc=Perseus%3Atext%3A1999.01.0138%3Ahymn%3D26

The Epiphany of Dionysus Mosaic in Delos shows the God exactly as Homer describes him… splendid, thickly wreathed with ivy and laurel, a god of abundant clusters of grapes! An anonymous 2nd century BC mosaicist, created on the island of Delos, at the House of Dionysus to be exact, a stunning mosaic emblema depicting Dionysus in all his glory. Against a black background, the God of wine and theater, ivy-crowned, wings outstretched, holding with his right hand a ribboned thyrsus like he is holding a spear, is shown on the back of a tiger that wears a necklace wreath of vines and grapes around its neck. They seem to ride within the boundaries of a landscape mosaic composition of plants, a beetle, and a kantharos-type cup. Is Dionysus depicted coming back from India, magnificently winged like a daemon? It would be nice if we were certain.

The mosaic in the House of Dionysus is one of the finest examples of Opus Vermiculatum. The tesserae used for carrying it out, measuring about one-millimeter square, were made of glass, faience, terracotta, and natural stones. Their small size made it easier for the mosaicist to produce a realistic figured scene, shading, known to the Greeks as skiagraphia, for three-dimensionality, and a sense of illusionism. The name and origin of the mosaicist are a mystery. The name and origin of the owners of the so-called ‘House of Dionysus’ in Delos is a mystery as well. Today, the House of Dionysus stands out from afar thanks to its huge marble columns that surround the courtyard where the Epiphany of Dionysus Mosaic, one of the most exquisite creations of the Hellenistic art of mosaic-making was placed, for all visitors, to admire.

For a PowerPoint on God Dionysus, please… Check HERE! 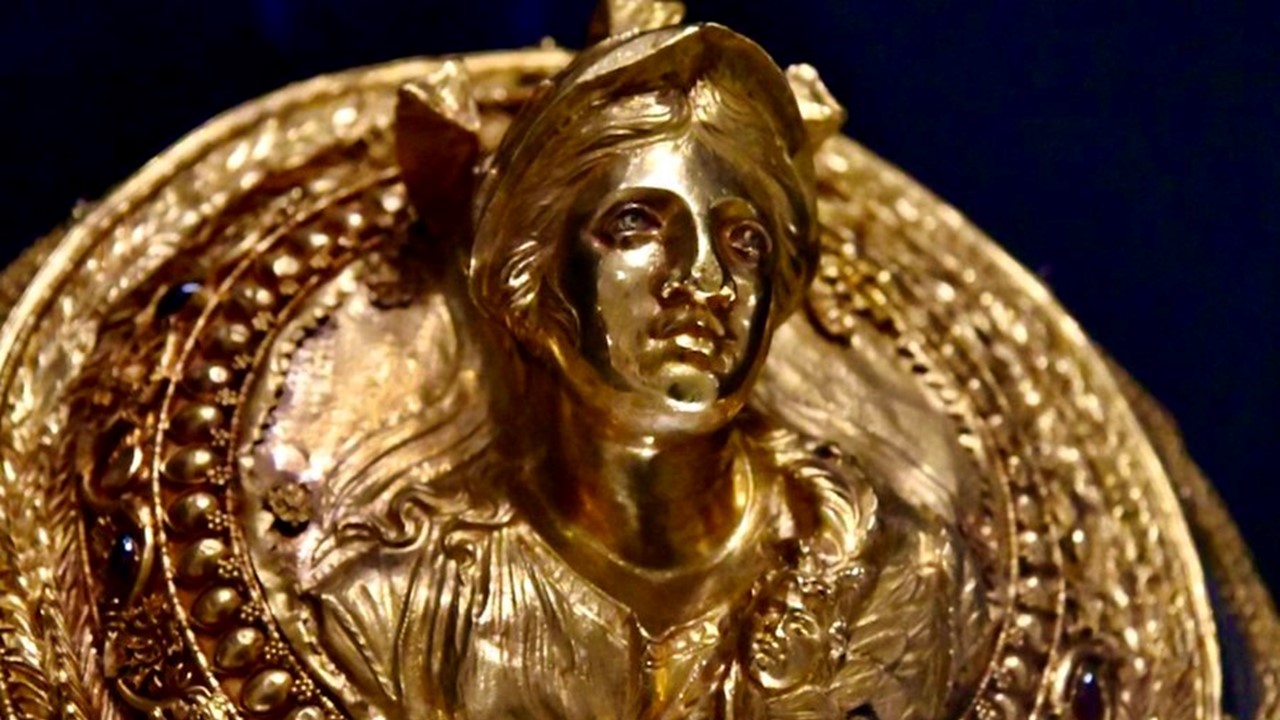 Amarantha sweet and fair / Ah braid no more that shining hair! / As my curious hand or eye / Hovering round thee let it fly.    /    Let it fly as unconfin’d / As its calm ravisher, the wind, / Who hath left his darling th’East, / To wanton o’er that spicy nest.    /    Ev’ry tress must be confest / But neatly tangled at the best; / Like a clue of golden thread, / Most excellently ravelled.    /    Do not then wind up that light / In ribands, and o’er-cloud in night; / Like the sun in’s early ray, / But shake your head and scatter day… wrote Richard Lovelace, back in the 17th century… no Hellenistic Golden Hairnets for… Amarantha sweet and fair! https://www.poetryfoundation.org/poets/richard-lovelace

The visitors of the Ancient Greeks: Science and Wisdom Exhibition in the Science Museum (London, 17 November 2021 – 05 June 2022) will be able to admire a rare, Hellenistic Golden Hairnet from the Benaki Museum in Athens and marvel at its amazing beauty and craftsmanship! This is a real treat as only a handful of such Golden Hairnets survive today scattered around major Museums around the world. https://www.sciencemuseum.org.uk/see-and-do/ancient-greeks-science-and-wisdom

The Exhibited Hairnet comes to London from Greece, and specifically, the Benaki Museum in Athens. Gold Hairnets were created by exceptional goldsmiths for aristocratic, well-to-do Greek ladies of the Hellenistic period (late 4th to early 1st cent. BC), to contain a simple hair chignon at the back of their head. The Benaki Hairnet consists of a central gold medallion with a bust of Athena in high relief, and an intricate, gold net. Goddess Athena is depicted wearing a helmet with three plumes, a laurel wreath, and an oblique aegis with a mermaid. The bust of Athena is framed by concentric bands adorned with ornaments applied in the jeweler’s fine technique of filigree and granulation. The lavish decoration is mostly floral consisting of a wreath of beautifully executed pointed leaves, an exquisite, and complex band of floral designs, and a strip of eggs and tiny rosettes. The central medallion was further embellished with enameling and minuscule beads of garnet. The gold net around the medallion consists of a lattice of chains with intersecting points articulated with tiny rosettes. What an amazing achievement of workmanship! https://www.benaki.org/index.php?option=com_buildings&view=building&id=11&Itemid=533&lang=en and https://www.benaki.org/index.php?option=com_collectionitems&view=collectionitem&id=140287&lang=en&lang=el and https://ellaniapili.blogspot.com/2015/11/blog-post_328.html

Describing the Benaki Museum Medallion Berta Segall writes… The artist of the Benaki medallion wanted to achieve unity. The elements of the ornamental frame are part of a continuous, flowing design, the bust, by taking up as much as possible of the background and touching the border, gives the impression of a full length figure cut off by a wreath. Its modeling is an example of the “impressionistic” technique in relief which uses a soft, almost imperceptible gradation of planes from the high to the very low, and from there to engraving. Thus, the folds of the garment are indicated in low relief, and even shallower, almost disappearing into the background, are the two plumes of the helmet right and left of the face. Berta Segall, Two Hellenistic Gold Medallions from Thessaly, Record of the Museum of Historic Art, Princeton University, Vol. 4, No. 2 (Autumn, 1945), pp. 2-11 https://www.jstor.org/stable/3774132?seq=3#metadata_info_tab_contents

The Benaki Museum Hairnet was part of an unbelievable “treasure” of 44 pieces of jewelry sold to private collectors in Athens, in 1929. The “treasure,” a product of illegal excavations, came from Thessaly, and the exact circumstances of their discovery are not well established. According to one testimony, they were discovered inside a copper vessel near Almyros in Magnesia, according to a source, the “treasure” came from the area of ​​Lamia-Lianokladi. It has also been claimed that the 44 pieces of exquisite jewelry were found in Domokos, while the antique dealer, who sold 35 pieces of jewelry to the collector Eleni Stathatou (today in the Stathatos Collection in the National Archaeological Museum in Athens) and 9 to the Benaki Museum, assured that they were discovered near Karpenisi. https://ellaniapili.blogspot.com/2015/11/blog-post_328.html

For a PowerPoint on Hellenistic Golden Hairnets, please… check HERE!

The Science Museum in London promises a unique experience to the visitors of their free exhibition Ancient Greeks: Science and Wisdom (17 November 2021 – 05 June 2022). The Museum experts believe that curiosity and investigation are central to furthering our understanding of the universe today… and suggest that we step back through millennia… and discover how the ancient Greek civilization questioned, contemplated, and debated the natural world. If your steps take you to London, the Science Museum Exhibition Ancient Greeks: Science and Wisdom, is worth visiting! https://www.sciencemuseum.org.uk/see-and-do/ancient-greeks-science-and-wisdom and https://www.sciencemuseum.org.uk/guides for a free guidebook.