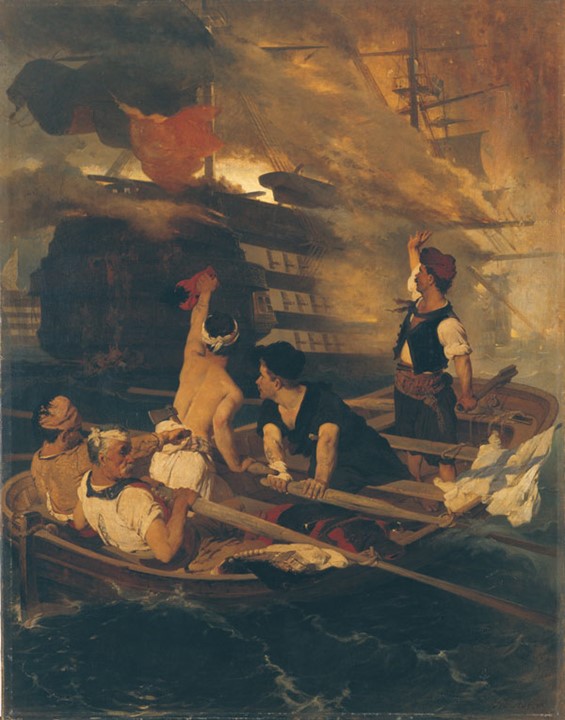 Every time I travel to Metsovo, in the Epirote mountains of Pindos, in Northern Greece, I visit the Averoff Gallery and stop in front of Nikiforos Lytras’s painting Kanaris Burning the Turkish Flagship. You cannot miss it… It is one of the most captivating 19th-century Greek paintings. https://www.averoffmuseum.gr/

Kanaris Burning the Turkish Flagship is an amazing departure from what Nykiforos Lytras studied in the Münchner Akademie der Bildenden Künste under the tutelage of Karl Theodor von Piloty (1826-1886). An influential Art School, the Münchner Akademie, attracted and trained artists from around the world to become leading painters, able to combine in their style, academic realism, baroque colourism and dark chiaroscuro. The artists of the Akademie were committed to monumental history paintings, landscapes, ethnography, portraits and still life. Naturalism in its depiction of human emotions was not among the School’s greatest artistic pursuits. http://www.artmag.gr/art-history/art-history/item/270-i-sxoli-you-monaxou

Lytras’s painting on the heroic deed by Konstantinos Kanaris is a historic painting with a twist! The artist moves away “from the romantic tendency that prevailed in the School of Piloty to a more naturalistic one in which the genre element played the dominant role.” According to the description provided by the Averoff Museum “Lytras` anthropocentric painting… was not concerned so much with the historical event per se. More so it was the projection of the heroic act carried out by brave persons worthy of emulation. The flaming ship is thrust into the distance to form the backdrop for the human action that is played out on a plane close to the viewer. Thus, in contrast to the ambiguous treatment of the background, where the ship disappears half-hidden by the smoke, the realistic rendering of the Psarians with Kanaris in the boat gives the work the immediacy and truth that interested the artist.”     https://www.averoffmuseum.gr/kanaris-burning-the-turkish-flagship/?lang=en

Nikiforos Lytras, the painter of Kanaris Burning the Turkish Flagship in Metsovo, was born in Pyrgi, on the Cycladic island of Tinos, the son of a marble sculptor. An exceptional talent, Lytras studied at the Athens School of Art from 1850 until 1860 and then, as the recipient of a state scholarship, he continued his studies at the Munich Academy, in the class of Karl von Piloty. In 1866 Lytras was back in Greece and was appointed professor at the Athens School of Fine Arts, a position he held for 38 productive years. A conscientious teacher, but interested to experience new ideas and always open to new trends, Nikiforos Lytras became the leading Greek artist of his time, popular with the people and honoured by his students and fellow artists.

There are two paintings on the theme of Kanaris Burning the Turkish Flagship. The earliest, chronologically, was painted by Nikiforos Lytras and today is exhibited in the Averoff Museum at Metsovo, one of my favourite Art Museums in Greece. The second painting, by  Ivan Konstantinovich Aivazovsky, was painted in 1881 and is part of the E. Koutlidis Collection and is exhibited in Athens at the National Gallery. For a Student “Compare and Contrast” Activity, paintings, please… Check HERE!

If you wish to learn more about the Greek War of Independence and the Bicentennial Celebrations in 2021, please VISIT the official Greece 1821-2021 Bicentennial site http://www.greece2021.gr, Twitter, https://twitter.com/Greece_2021, Facebook, https://www.facebook.com/Greece2021/, and Instagram, https://www.instagram.com/greece2021/?hl=el

It was for these children that we fought… paraphrasing the words of Yanni Makrigianni, 1794-1864, Greek Revolutionary Fighter of 1821! Celebrating the Greek Revolution of 1821 and remembering the children who probably suffered the most.

“The torch that was Missolonghi shed its light as far as Vasiladhi and Klisova and over the whole plain, and even reached us. The flashes of gunfire looked like a host of fireflies. From Missolonghi we heard the shrieks of women, the sound of gunfire, the explosion of powder magazines and mines, all combined in an indescribably fearful noise. The town was like a roaring furnace” remembers Nikolaos Kasomoulis (1795 – 1872), who took part, fought and survived the Exodus. I hope Perlberg’s Young Drummer Boy, so romantically groomed, successfully survived the tragedy…     https://books.google.gr/books?id=GhCLDwAAQBAJ&pg=PA26-IA16&lpg=PA26-IA16&dq=%22The+flashes+of+gunfire+looked+like+a+host+of+fireflies.%22&source=bl&ots=sDTZ6TqHS3&sig=ACfU3U1jIfv4avEDAVvPpC9AfvJbcVkRmQ&hl=el&sa=X&ved=2ahUKEwiE8qvu2bvvAhWDO-wKHTb_A5MQ6AEwAnoECAEQAw#v=onepage&q=%22The%20flashes%20of%20gunfire%20looked%20like%20a%20host%20of%20fireflies.%22&f=false

For our Youngsters… the National Historical Museum in Athens

To do the Colouring Activity Press on each picture you wish your child to colour – download it – print it – DONE! You can choose between heroes and heroines of the Greek War of Independence and celebrate an important moment in Greek History. From top to bottom, the Colouring Page Figures are: Theodoros Kolokotronis, Odysseas Androutsos, Laskarina Bouboulina, Konstantinos Kanaris, Manto Mavrogenous, Germanos, Metropolitan Paleon Patron, Andreas Lontos, Asimo Goura, Ioannis Makrigiannis, Domna Visvizi, Christos Kapsalis, Andreas Pipinos, Dimitrios Papanikolis

For our Youngsters… a List of Student Activities on the Greek Revolution of 1821 prepared by Greek Museums and Foundations… HERE!

For an easy to print Celebrating the Greek Revolution of 1821 Worksheet, please… Click HERE! 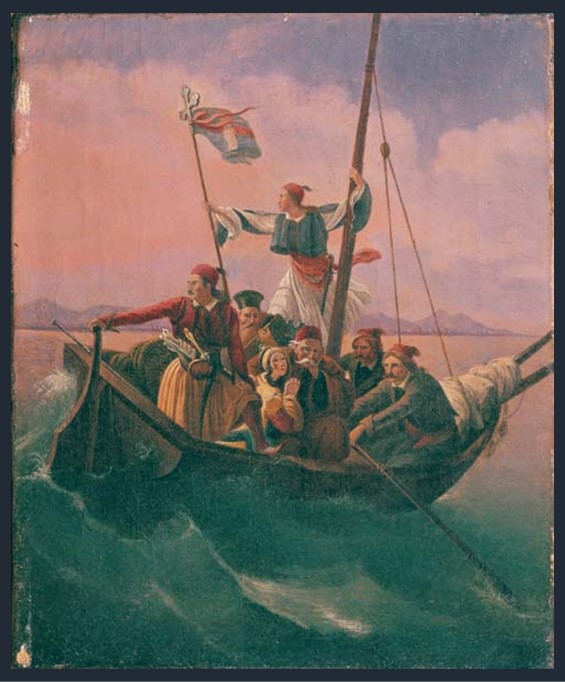 “…Fill high the bowl with Samian wine!  /  On Suli’s rock, and Parga’s shore,  /  Exists the remnant of a line  /  Such as the Doric mothers bore;  /  And there, perhaps, some seed is sown,  /  The Heracleidan blood might own.          /          Trust not for freedom to the Franks—  /  They have a king who buys and sells;  /  In native swords and native ranks  /  The only hope of courage dwells:  /  But Turkish force and Latin fraud  /  Would break your shield, however broad….” Writes George Gordon Byron in The Isles of Greece and makes the best possible introduction for Dionysis Tsokos’s Boat of Geeks at the Averoff Museum in Metsovo.     https://englishverse.com/poems/the_isles_of_greece

Dionysis Tsokos’s painting Boat of Geeks is closely connected to the fate of the small city of Parga on the Ionian Coast of Epirus. Parga, a small city/fortress, was always closely connected to the European political interests of the Ionian Islands. Since 1360 when the fortress of Parga was built with the help of the Normans who held, at the time the island of Corfu, the Pargians faced countless Ottoman attacks while they were under Venetian, French or British rule. In 1815 the inhabitants of the city of Parga rebelled against the French rule, under the instigation of the British, and a short period of British rule started. Seeing Parga as the stepping stone to achieving their final goal: to occupy the Ionian Islands, the British, in 1817, sold Parga to Ali Pasha for 150,000 pounds.     https://www.kastra.eu/castleen.php?kastro=parga

What happened next is best described in the October 1819 edition of the Edinburgh Review… “As soon as the notice was given [of how much Ali was to be charged for their homeland] every family marched solemnly out of its dwelling, without tears or lamentation; and the men, preceded by their priests, and followed by their sons, proceeded to the sepulchres of their fathers, and silently unearthed and collected their remains, – which they placed upon a huge pile of wood which they had previously erected before one of their churches. They even took their arms in their hands, and, setting fire to the pile, stood motionless and silent around it, till the whole was consumed. During this melancholy ceremony, some of Ali’s troops, impatient for possession, approached the gates of the town; upon which a deputation of citizens was sent to inform our Governor, that if a single Infidel was admitted before the remains of their ancestors were secured from profanation, and they themselves, with their families, fairly embarked, they would all instantly put to death their wives and children, – and die with their arms in their hands, – and not without a bloody revenge on those who had bought and sold their country. Such a remonstrance, at such a moment, was felt and respected, as it ought by those to whom it was addressed. General Adam succeeded in stopping the march of the Mussulmans. The pile burnt out – and the people embarked in silence…”      http://newsteadabbeybyronsociety.org/works/downloads/sale_parga.pdf     and      https://books.google.gr/books?id=7kNBAAAAYAAJ&pg=RA1-PA12&lpg=RA1-PA12&dq=Edinburgh+Review+Sale+of+Parga&source=bl&ots=hZxwnxM1hD&sig=ACfU3U3ac4JXKloQ18zhWLsbpAsGjXXTtQ&hl=el&sa=X&ved=2ahUKEwjug-2Ly5jvAhVfQhUIHaLnBgkQ6AEwB3oECAkQAw#v=onepage&q=Edinburgh%20Review%20Sale%20of%20Parga&f=false pp. 22-23

Boat of Geeks by Dionysis Tsokos depicts the final act of Parga’s sale by the British to Ali Pasha… “a boat full of refugees – resistance fighters, a priest, and a woman – floundering on the waves as it heads for foreign shores. One gallant lad stands embracing the mast and holding the Greek flag, gazing intently at the fatherland he is abandoning, while the captain holds fast to the helm.”     https://www.averoffmuseum.gr/boat-of-greeks/?lang=en

Dionysis Tsokos created two paintings on the theme of Greeks fleeing Parga after the shocking 1819 British sale to Ali Pasha. The earliest, chronologically, of the two paintings, is today exhibited in the Averoff Museum at Metsovo, one of my favourite Art Museums in Greece, the second painting, dated a little later is part of the E. Koutlidis Collection and is exhibited in Athens at the National Gallery. For a Student “Compare and Contrast” Activity on Dionysis Tsokos’s paintings, please… Check HERE!

If you wish to learn more about the Greek War of Independence and the Bicentennial Celebrations in 2021, please VISIT the official Greece 1821-2021 Bicentennial site http://www.greece2021.gr, Twitter, https://twitter.com/Greece_2021, Facebook, https://www.facebook.com/Greece2021/, and Instagram, https://www.instagram.com/greece2021/?hl=el

It was for these children that we fought… Celebrating the Greek War of Independence …paraphrasing the words of Yanni Makrigianni, 1794-1864, Greek Revolutionary Fighter of 1821!

To do the Colouring Activity Press on each picture you wish your child to colour – download it – print it – DONE! You can choose between heroes and heroines of the Greek War of Independence and celebrate an important moment in Greek History.

For an easy to print Celebrating the Greek War of Independence Worksheet, please… check HERE!