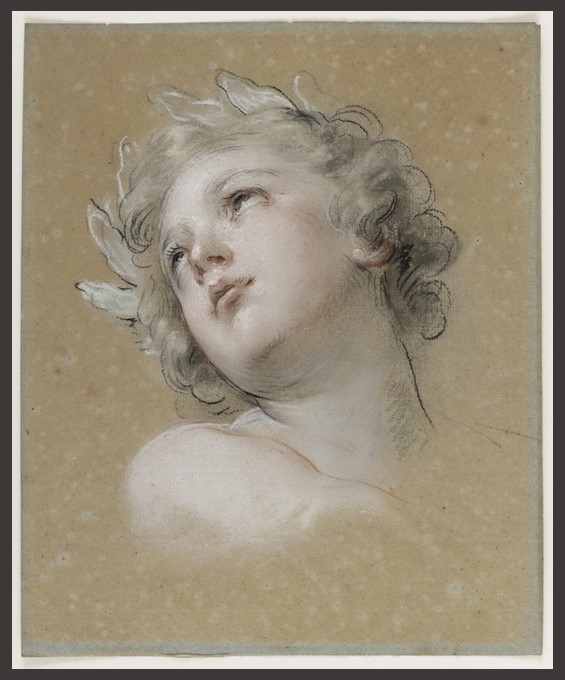 The Doors of the Versailles Exhibition… Drawings for Versailles, 20 years of Acquisitions… closed for the interested visitors, but the preparatory drawing of a head for the Love of Virtue by François Lemoyne has become a favourite! The exhibition displayed acquisitions that have joined the Palace of Versailles Graphic Arts Department over the last 20 years. On display, in Madame de Maintenon’s apartments, visitors were able to admire pastels, gouaches, watercolours, and other works that are often kept in storage because of their great fragility. Portraits and scenes from life at court, such as Louis XIV portrayed as a Roman emperor or Charles Perrault drawn by Charles Le Brun, plans, architectural drawings, and preparatory sketches for the major painted decors of the Palace of Versailles were on display and greatly admired! The visitors traveled through four centuries of graphic creation, discovering a Versailles as envisioned by great artists like Charles Le Brun, Charles de la Fosse, François Lemoyne, Richard Mique, Jacques Gondoin, and Lucien Lévy-Dhurmer… a place of great wonders! https://en.chateauversailles.fr/news/exhibitions/drawings-versailles-20-years-acquisitions#the-exhibition

Around 1733, while François Lemoyne was painstakingly working for the Apotheosis of Hercules ceiling decoration of the Versailles Hercules Room, a small preparatory drawing of a head for the Love of Virtue was quickly drawn… and if I may humbly say, the finesse of French Baroque Art turning to Rococo comes to fruition.

Part of the King’s (Louts IV 1638-1715) State Apartment, the Hercules Room was lavishly decorated in the Italian-style with exceptional marble wall paneling, splendid chimney bronzes, a monumental painting by the Venetian Paolo Veronese depicting the Feast in the House of Simon and the largest painted ceiling, representing the Apotheosis of Hercules by François Lemoyne. The decoration of the Hercules Room initiated in 1712, was interrupted by the death of Louis XIV in 1715; it resumed in 1729 and was completed in 1736. The Hercules Room is undoubtedly one of the finest in the palace. https://en.chateauversailles.fr/discover/estate/palace/king-state-apartment#the-hercules-room and https://en.chateauversailles-spectacles.fr/tag/hercules-room_t50/1

The Room’s pièce de resistance is Lemoyne’s Apotheosis of Hercules. This vast, impressive, allegorical work, depicting no fewer than 142 persons, can be considered on a par with masterpieces by Italian fresco painters. It was created, however, using the marouflage technique, that is the scenes were painted on canvas and then stuck onto the ceiling. When the painting was finally cleaned and restored in 2000 the composition’s drama and bright colours were justly revealed and the room was once more lit up enhancing the other great exhibited masterpiece, the Renaissance monumental painting of the Feast in the House of Simon by Paul Veronese. http://www.versailles3d.com/en/over-the-centuries/xxie/2000.html

François Lemoyne was a hard-working and ambitious artist of the early 18th century, aspiring to be seen as the new Charles Le Brun. He was admired by his contemporaries for covering vast spaces with bold mythological scenes, graceful figures, and elegant, pastel colours. In 1728, he was awarded a royal commission to paint the ceiling of the Hercules Room at Versailles, at à ciel ouvert style. The Apotheosis of Hercules painting (finished in 1736) received unanimous praise, Voltaire complimented the artist’s talent, and Lemoyne was appointed 1st painter of King Louis XV. It was a short triumph. Six months later, Lemoyne committed suicide exhausted by work, court intrigue at Versailles, the death of his wife, and psychological instability. https://www.getty.edu/art/collection/artists/3473/francois-le-moyne-french-1688-1737/

For a PowerPoint on François Lemoyne, please… Check HERE!

Published on October 14, 2018at the Historians of Netherlandish Art Reviews, I read: Frans Hals was rediscovered as a modern idol two hundred years after his death. He was admired, even adored by late 19th-century artists such as Édouard Manet, Max Liebermann… Vincent van Gogh…  and American artist Robert Henri, I would like to add. They were all impressed by his loose touch and rough painting style, which came across as ‘Impressionist’… Comparing paintings by Frans Hals to work by the artists whom he inspired gives insight into how modern Frans Hals was in their eye and why they used to say that ‘Frans Hals, c’est un moderne’. The Laughing Boy by Robert Henri is a painting that shows how Frans Hals influenced an American artist of the Ashcan School as well… https://hnanews.org/frans-hals-and-the-moderns/

About 1900, a group of Realist artists set themselves apart from and challenged the American Impressionists and academics. They came to be known as the Ashcan School and Robert Henri was a leading figure among them. The Ashcan School artists selectively documented an unsettling, transitional time in American culture that was marked by confidence and doubt, excitement, and trepidation. Ignoring or registering only gently harsh new realities such as the problems of immigration and urban poverty, they shone a positive light on their era. Along with the American Impressionists, the Ashcan artists defined the avant-garde in the United States until the 1913 Armory Show introduced to the American public the works of true modernists Henri Matisse, Pablo Picasso, Marcel Duchamp, and others. https://www.metmuseum.org/toah/hd/ashc/hd_ashc.htm

Robert Henry Cozad (1865-1929 ) was born in Cincinnati, Ohio, to Theresa Gatewood Cozad and John Jackson Cozad, a gambler and real estate developer. The family, in a true “Wild West” story of land dispute and fatal pistol shooting, fled from Cincinnati to Denver, Colorado where young Robert changed his name to Robert Earl Henri, and in 1883, the family moved to New York City, and then, to Atlantic City in New Jersey. In 1886, a twenty-one years old Robert Henri enrolled at the Pennsylvania Academy of the Fine Arts, one of the finest Art Schools in the US at the time, where he studied under Thomas Anshutz. Later, in Paris, Henri studied at the Académie Julian and the École des Beaux-Arts. From 1888 to 1891, when he returned back to Philadelphia, Robert stayed and traveled in Europe where he came to admire greatly the work of Francois Millet, and embrace Impressionism. Back in the United States, Robert Henri gradually became a fine Art teacher and an acclaimed artist, a leading member of the Ashcan School, an organizer, and a contributor artist of a landmark show entitled “The Eight” in N York. Robert Henri was an avid traveler, an influential Art teacher, and a great mentor to women artists in the United States. https://en.wikipedia.org/wiki/Robert_Henri

During the summers of 1907 and 1910, Henri worked in the Netherlands, where he became captivated with the work of Frans Hals (1580-1666), the Dutch painter known for using lively brushwork to create animated portraits. Hals, according to the Birmingham Museum of Art in the US, made a number of pictures of laughing children, which Henri sought to emulate in his own paintings of Dutch youths. Henri described the subject of this canvas, Jopie van Slouten, as “a great, real human character to paint.” Robert Henri painted a second portrait of the Dutch boy, known as Dutch Joe, and exhibited it in the Milwaukee Art Museum. For his second portrait of young Jopie van Slouten, Henri said: “Jopie thought it was a great joke to pose, and I thought him a great, real character. I consider it one of my successes in an effort to record a boy as he was.” http://collection.mam.org/details.php?id=13533 and https://www.artsbma.org/collection/the-laughing-boy-jopie-van-slouten/

Between October 13, 2018, to February 24, 2019, in Haarlem, in the Netherlands, a very interesting exhibition took place titled Frans Hals and the Moderns. This exhibition showed the enormous impact of Frans Hals on modern painters. It was for the first time, that portraits of the famous 17th-century Dutch artist were presented alongside modern artistic reactions to his work… like the Laughing Boy by the American Robert Henri. https://www.franshalsmuseum.nl/nl/event/frans-hals-en-de-modernen/ 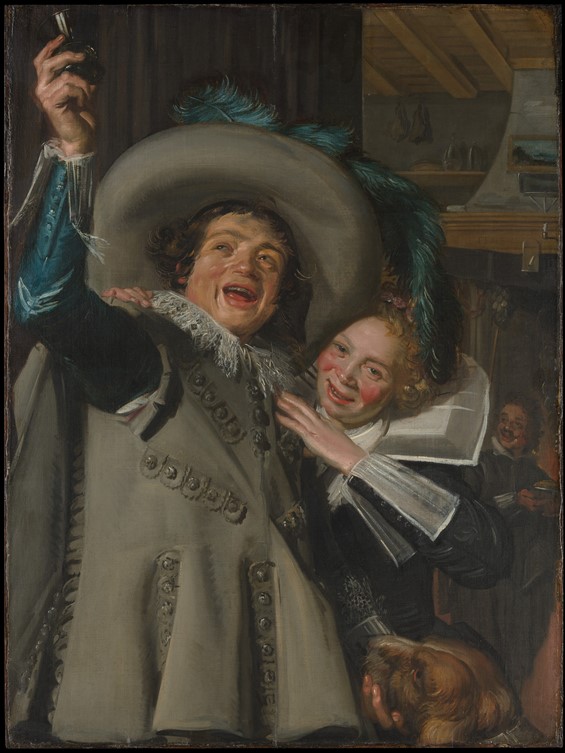 If you ask my humble opinion, Hals’s painting of a Young Man and Woman in an Inn epitomizes Baroque Bliss! There is merriment in the way the woman cautiously leans over the young man. There is joy in how the young man laughingly raises his flask with his right hand and affectionately caresses an attending dog with his left. Extravagance in the background decoration is obvious in every aspect. So much so that a landscape painting hangs over the tavern’s mantle! The artist’s painting technique is equally excessive. With fluid movement and loose brushstrokes… is Hals implying that the painting was executed with speed, to catch a moment of great enjoyment? In the words of Walter Liedtke “…all artificial elements are swept away by a way of sensations: light, air, movement, and, one imagines, taste smell, and noise.”

The Baroque is an elusive word and an interesting style to explain and understand. The first step I usually take, is to think of descriptive adjectives that best characterize the period: extravagant, theatrical, dramatic, grand, luxurious, sensual, majestic, opulent… to mention only a few. I also try to compare Baroque period artworks from different areas in Europe, a landscape painting for example by Claude Lorrain to a Rubens one. The differences are extraordinary, yet there are striking similarities. Finally, the word Baroque itself comes from the Portuguese word barroco, a term used to describe an irregularly-shaped pearl. How extravagant can it get! The Baroque style, dated during the 17th century, originated in Rome, spread all over Italy, from Sicily to Venice, and became particularly popular in Spain, France, and the Low Countries.

The Metropolitan Museum of Art has a large and quite representative collection of Fans Hals paintings. The Young Man and Woman in an Inn is one of their finest examples.  Frans Hals: Style and Substance, https://www.metmuseum.org/art/metpublications/Frans_Hals_Style_and_Substance?Tag=&title=style%20and%20Substance&author=&pt=0&tc=0&dept=0&fmt=0

For a Student Activity on Young Man and Woman in an Inn, please… check HERE! 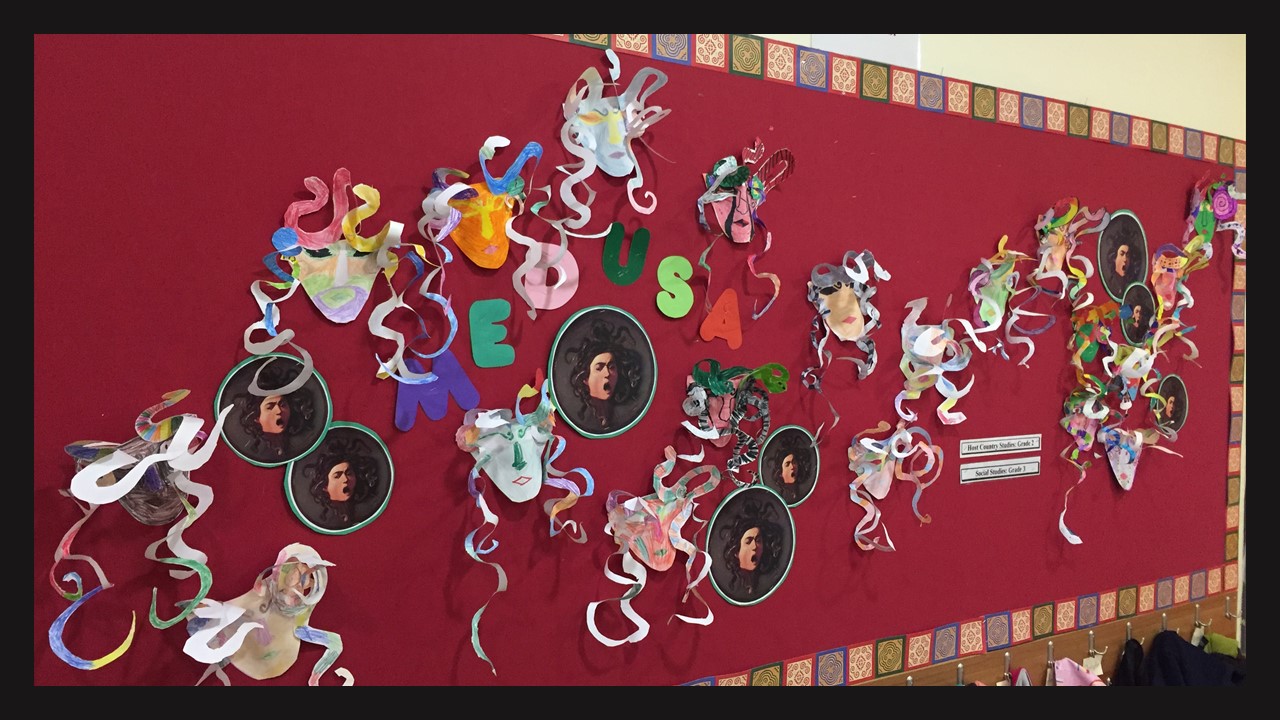 Medusa was once upon a time an entrancing maiden, the only mortal sister of the three Gorgons, attractive for her beauty originally, feared as an image of evil later, when Athena’s anger turned her into a hideous monster… According to the Roman Poet Ovid (Metamorphoses 4.770), Athena was so fierce in her punishment, Medusa’s hair was transformed into venomous snakes, and her once lovely face, looked upon, petrified the viewer.

To save his mother Danae from the much-unwanted attention of king Polydectes of Seriphos, young Perseus was tasked with the impossible, killing Medusa. Perseus, however, was not alone and helpless in his adventure. He carried with him divine gifts, Athena’s mirrored shield, Hermes’s gold, winged sandals, Hephaestus’s adamantine sword and Hades’s helmet of invisibility. According to Ovid Perseus was successful, Medusa head was cut and ultimately ended up in Athena’s Aegis.

“Medusa in Ancient Greek Art” is a Metropolitan Museum of Art article worth reading: https://www.metmuseum.org/toah/hd/medu/hd_medu.htm

“flee, for if your eyes are petrified in amazement, she will turn you to stone,” wrote Gaspare Mustola, an Italian poet and writer of the 17th century, and Michelangelo Merisi da Caravaggio painted the most amazing Medusa head of all time!

My Grade 3 students love the terrifying Myth of the Medusa and creating a Mask is always a successful Activity! The best Mask by far is offered by the Cleveland Museum of Art… which I use every year with student enthusiasm and great success! https://www.clevelandart.org/sites/default/files/documents/other/MakeaMaskofMedusa.pdf

For a PowerPoint on the student Mask Activity… check HERE!