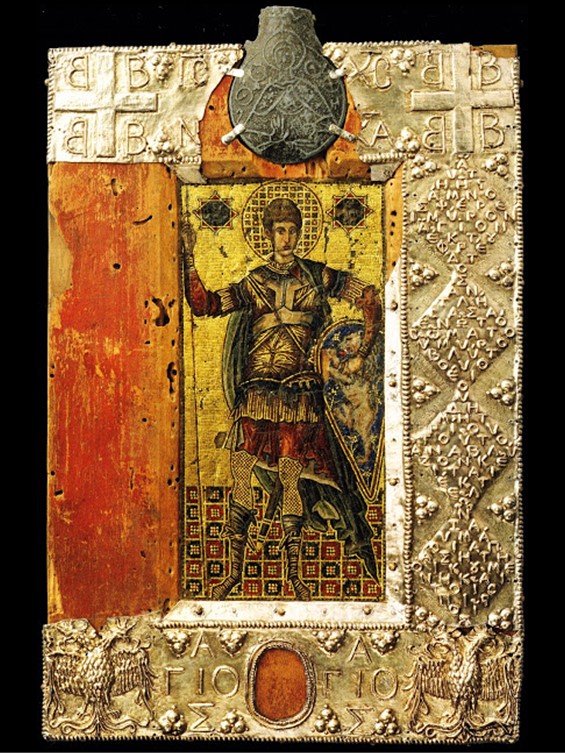 One of the inscriptions in the Miniature Mosaic Icon of Saint Demetrios in Sassoferratoinforms us that… This ampulla (at the top of the Icon), bears holy oil drawn from the well in which the body of the divine Demetrios reposes, which gushes here and accomplishes miracles for the entire universe and for the faithful… What a remarkable way to remember Saint Demetrios and celebrate his feast day!

In 1472, Niccolò Perotti (1430-1480), secretary to Cardinal Bessarion and archbishop of Siponto, donated to Sassoferrato, the city of his birth, a collection of reliquaries, including the Mosaic Icon of Saint Demetrios. That was a notable donation considering Niccolò Perotti’s position. As Cardinal Bessarion’s secretary, he was able to travel as far as Trebizond in the East, and acquire a collection of valuable reliquaries, manuscripts, and icons. It has been suggested that the Mosaic Icon of Saint Demetrios was gifted to Perotti by no other than Bessarion himself, known to be the owner of a collection of Late Byzantine Mosaic Icons… but there is no proof for this.  https://www.academia.edu/39903340/Displaying_an_Icon_The_Mosaic_Icon_of_Saint_Demetrios_at_Sassoferrato_and_its_Frame

The Museu Civico in Sassoferrato is fortunate to hold such an important and rare relic of the Palaiologan Renaissance, the final period in the development of Byzantine art. On a poplar board, slightly excavated at its center, rendered in micromosaic, stands Saint Demetrios, patron Saint of Thessaloniki. He is placed against a gold background and a tiled ground. He is in military garb, holds a lance with his righthand, and, with the left, a blue shield decorated with a heraldic white lion against a ground strewn with gold stylized flowers. Based on stylistic analysis, according to Martin Donnert,  the mosaic icon at Sassoferrato was executed in the 14th century as a typical work of Palaiologan art. This date is further confirmed by the radiocarbon analysis dating of the wooden support of the icon to 1279 ± 26 years, which gives a terminus post quem. Byzantium: Faith and Power (1261–1557), Evans, Helen C., ed., with essays by… https://www.metmuseum.org/art/metpublications/Byzantium_Faith_and_Power_1261_1557 pp. 231-233 and https://www.academia.edu/39903340/Displaying_an_Icon_The_Mosaic_Icon_of_Saint_Demetrios_at_Sassoferrato_and_its_Frame

The ampulla at the top of the Icon’s frame is a wonderful rarity! It turns the Mosaic Icon into a precious reliquary of Saint Demetrios’s cult. The text, on the right side of the Icon’s frame, explains the reasons why the ampulla was added to the Icon’s composition. Prof. Martin Donnert clarifies that …Since the 12th century, the existence of miraculous oil (the Myron) connected with the cult of St Demetrios is well attested in the sources. He also adds that lead ampullae from the late 12th to the 14th centuries that contained the holy Myron for pilgrims to the saint’s tomb, called koutrouvia… were found at various places in northern Greece and the Balkans. One of these ampullae, a cherished relic in itself, is the one incorporated at the top of the icon frame… showing St Demetrios holding a cross on one side, and, on the opposite side, St Theodora, the second myron-giving saint of Thessaloniki. https://www.academia.edu/39903340/Displaying_an_Icon_The_Mosaic_Icon_of_Saint_Demetrios_at_Sassoferrato_and_its_Frame

The silver-gilt frame, dated during the mid-15th century is rich in information. A number of inscriptions within star-shaped cartouches, along with the imperial symbol of the double-headed eagle and the tetrabasileion, may indicate a distinguished member of the Palaiologan family, to be the original commissioner of the Icon. Furthermore, Prof Martin Donnert suggests Demetrios Palaiologos and the Palaiologoi of Montferrat! https://www.academia.edu/39903340/Displaying_an_Icon_The_Mosaic_Icon_of_Saint_Demetrios_at_Sassoferrato_and_its_Frame

I like what the late Professor Nicolas Oikonomides wrote about the Byzantine mosaics in the vestibule and the narthex of the Great Church of Hagia Sophia… The imperial mosaics of Saint Sophia, beyond their artistic value, are of considerable historical importance… and… mosaics were made in the hope that they would survive ad saecula saeculorurn. Consequently, although representing a particular scene, or event, or idea that prevailed at the time of their composition, they were also supposed to bequeath their presumably understandable message to future generations. I am reading his article, Leo VI and the Narthex Mosaic of Saint Sophia, follow his steps, and learn interesting facts about the Enthroned Christ and Emperor Leo VI the Wise, the mosaic decorating the lunette over the Imperial Door of the Great Church. Dumbarton Oaks Papers, Vol. 30 (1976), pp. 151+153-172 (26 pages) https://www.jstor.org/stable/1291393 and http://archive.eclass.uth.gr/eclass/modules/document/file.php/SEAD336/Oikonomides-Leo%20VI.pdf

In 1930 Thomas Whittemore, an American scholar, archaeologist, and restoration expert founded the Byzantine Institute of America and in 1931 took over the responsibility of recovering the mosaics of Hagia Sophia after receiving the approval of the founder of the Turkish Republic, Kemal Ataturk, who turned Hagia Sophia into a museum four years later. 1n 1933 Whittemore uncovered and restored the mosaic decorating the lunette over the Imperial Door of Hagia Sophia. This mosaic, featuring the enthroned Christ in the center, a Byzantine Emperor in a prostrate position to his right, Whittemore identified him as Leo VI the Wise, and two medallions presenting the Mother of God and the Archangel Gabriel, is most unusual-a hapax in Byzantine art, according to Nicolas Oikonomides.  https://greekreporter.com/2020/07/14/the-american-who-restored-hagia-sophias-ancient-mosaics-to-their-former-glory/ and The Mosaics of St. Sophia at Istanbul by Thomas Whittemore, American Journal of Archaeology, Vol. 42, No. 2 (Apr. – Jun. 1938), p 220 https://www.jstor.org/stable/499667?read-now=1&refreqid=excelsior%3A6760f2942e2ab709e12081a284c41584&seq=3#page_scan_tab_contents and file:///C:/Users/aspil/OneDrive/Blog/Byzantium%20Mosaics/Leo%20the%20Wise%20Oikonomides.pdf

Byzantinologists agree that the Hagia Sophia Mosaic over the Imperial Door (Christ and Emperor Leo VI, the Wise) is to be dated to the second half of the ninth century or the beginning of the tenth. There is a disagreement, however, over the meaning of the whole composition, on which Oikononides gives an explanation I find interesting. file:///C:/Users/aspil/OneDrive/Blog/Byzantium%20Mosaics/Leo%20the%20Wise%20Oikonomides.pdf page 154

Prof. Nicolas Oikonomides presents, I believe, a very persuasive argument over the meaning of the composition. He stresses the idea of how unique and unusual the theme of an emperor prostrating himself in front of Christ is in Byzantine imperial iconography and questions… Is the depicted Emperor exhibiting extreme humiliation or repentance? Oikonomides is in favor of repentance over humiliation. To support his case, he recalls that the initial meaning of the Greek word μετάνοια is repentance. He also recalls that since early Byzantine times, the same term, μετάνοια. is used by Orthodox Greeks to mean prostration, because prostration was-and still is, an act of penance, a normal way for the Orthodox Greeks to show repentance. He then compares the Emperor depicted in the Hagia Sophia mosaic to famous manuscript illuminations depicting the Repentance of David, the Biblical King, and he concludes that the Hagia Sophia mosaic of an Emperor in a prostrate position shows a repentant emperor. file:///C:/Users/aspil/OneDrive/Blog/Byzantium%20Mosaics/Leo%20the%20Wise%20Oikonomides.pdf Pages 154-158 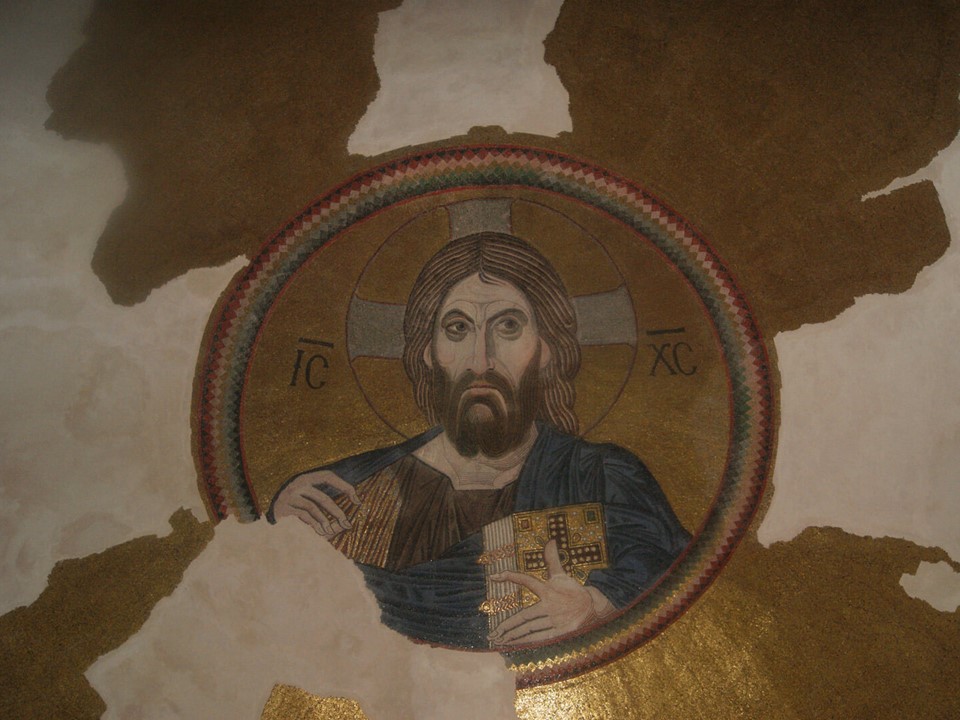 Christ Pantocrator in the Byzantine Monastery of Daphni… whose great eyes, dark and exorbitant and cast almost furtively over one shoulder, at total variance with His right hand’s serene gesture of blessing and admonition, spell not only pain but fear, anguish and guilt, as though He were in flight from an appalling doom. The only fit setting for such an expression is the Garden of ! Gethsemane; but this is a Christ-God in His glory, the All-Powerful One. It is tremendous, tragic, mysterious and shattering… writes Patrick Leigh Fermor in his travel book Mani. Travels in the Southern Peloponnese of 1958. https://patrickleighfermor.org/tag/mani/ and https://www.biblio.com/mani-by-fermor-patrick-leigh/work/20200

The sight of the Pantocrator image at Daphni is indeed breathtaking, and I particularly like Fermor’s use of adjectives… tremendous, tragic, mysterious, and shattering! Whether Fermor was right or not in his description… whether the Daphni Pantocrator survives today exactly as it was created by the anonymous 11th century Byzantine master… is not easy to answer, but was expertly addressed by Robin Cormack in his 2009 article Rediscovering the Christ Pantocrator at Daphni. Professor Cormack takes his reader on a wonderful journey as he “deciphers” the secrets of this amazing mosaic and the wondrous ways of mosaic restoration. Journal of the Warburg and Courtauld Institutes, Vol. 71 (2008), pp. 55-74 (20 pages) Published By: The University of Chicago Press https://www.jstor.org/stable/20462776?read-now=1&refreqid=excelsior%3Aefe48f19a158ab3c7526e9941fbf2d9f&seq=20

Visiting the Daphni Monastery has always been a wonderful experience! Built on the slopes of Mount Egaleo in the grove of Haidari, next to the ancient Athenian Ιερά Οδό (Sacred Road) that connected Athens with Eleusis, the site of the eponymous Eleusinian Mysteries, lies the Byzantine Monastery of Daphni. It is only interesting that the Monastery was built on the location of the ancient sanctuary of Apollo Daphnaios, destroyed during the invasion of the Goths in 395 AD. Unfortunately, of the old temple only one Ionic column still remains in the colonnade of the narthex, while the rest were removed by Lord Elgin in the 19th century. http://odysseus.culture.gr/h/2/eh251.jsp?obj_id=1514

According to the Greek Ministry of Culture (ΟΔΥΣΣΕΥΣ site), the first monastic community at Daphni was organized during the 6th century AD and was enclosed by strong defensive walls, almost square in plan. The catholicon was a three-aisled basilica which stood in the center of the courtyard. Along the inner NE side of the walls, two-storied buildings were constructed, containing the cells of the monks. A reception hall and a second block of cells were attached on the north wall of the enclosure. http://odysseus.culture.gr/h/2/eh251.jsp?obj_id=1514

What we see today is the 2nd phase of development and construction, dating from the 11th century (around 1080). The Monastery’s Katholikon is a cross-in-square church of the octagonal type, surmounted by a broad and high dome. It has a narthex, formed as an open portico… The exonarthex was constructed a little later, in the early 12th century and the chapel to the west was added in the 18th century… The porch with the three pointed arches in the west facade of the narthex was added in the 13th century by the Frankish monks and certainly points to western influence… The walls of the church are built in the simple cloisonne masonry with poor brick decoration, restricted on the windows… The monastery is protected by a square enclosure fortified with towers and ramparts, with two entrance gates on its east and west sides. http://odysseus.culture.gr/h/2/eh251.jsp?obj_id=1514

For an interesting Video on the Daphni Monastery, please Check… https://www.archaeology.wiki/blog/video/daphni-monastery/