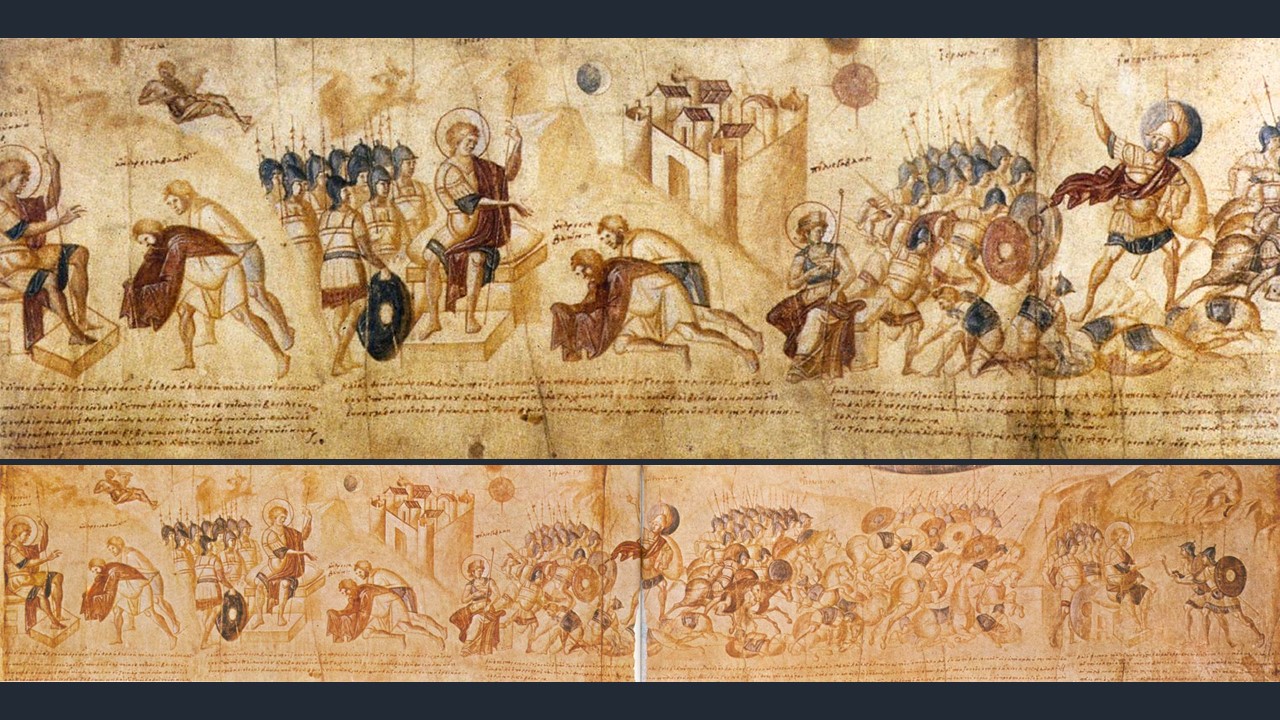 When I think of Byzantine Manuscripts, the first one that comes to my mind is the Joshua Roll… unique, luxurious and remarkable in every aspect… Hellenistic in spirit!

Dated in the 10th century, this Macedonian Renaissance illuminated manuscript comes to us in a very rare format, a Roll… 31 cm high and about 10 meters long, one of the most priceless treasures in the Biblioteca Apostolica Vaticana. The master artist of the Joshua Roll is unknown, but he definitely belonged to a selected group of Constantinopolitan painters trained in a style much influenced by the classicizing tradition prevailing in the Imperial Court of the time.

The Joshua Roll is dedicated to the Old Testament Book of Joshua. Although incomplete, as it starts with Chapter II and ends with Chapter X, it presents the most important adventures and military accomplishments of the great Israelite figurehead. Joshua was originally Moses’ assistant and after his death, the leader of the Israelite tribes, leading them in conquering the promised land of Canaan. When the Joshua Roll was created, the Byzantines were, after a long period of defence, able to successfully campaign in the Holy Land, enjoying decisive victories. Scholars believe that the illuminated manuscript was meant to glorify the military success of the Byzantine army, and exalt their Emperor.

The Joshua Roll is a very unique Codex, unparalleled and unrivalled in the whole world… yet enigmatic! The Bibliography of the Joshua Roll is extensive and challenging. In 2012 another volume was added – Wander, Steven H. The Joshua Roll. Wiesbaden: Reichert Verlag, 2012. pp. 224. ISBN: 978-389-5008-542 – where information of interest and controversy was added to the already extensive arguments. Wander “dates the manuscript to 961 and connects it to the patronage of the powerful middle Byzantine eunuch, courtier, and illegitimate son of Emperor Romanos I Lekapenos (r. 920-944), Basil the Parakoimomenos (chamberlain) (c. 925-c. 985).” Wander takes his controversial interpretation one step further, he “proposes that the Joshua Roll was the study for a small-scale triumphal column that would have commemorated Basil’s military success in the East during the reign of Emperor Constantine VII Porphyrogennetos (r. 945-959).” His arguments, important and novel, challenge long-standing assumptions. (Wander, Steven H. The Joshua Roll. Wiesbaden: Reichert Verlag, 2012. pp. 224. ISBN: 978-389-5008-542 (hardback) and an interesting review https://scholarworks.iu.edu/journals/index.php/tmr/article/view/20003

My favourite assumption is the Roll’s connection to monumental art, and more specifically the art of wall painting. There is a striking connection to a recently discovered fresco in the church of Hosios Loukas in Phocis, and the extraordinary fresco Marian Cycle of the church of Santa Maria Foris Portas a Castelseprio, dazzling its viewers today as it did in 1944 when they were discovered! The similarities between the Joshua Roll illuminations and the Castelseprio frescoes are long-standing, as they are both considered the products of a common artistic tradition. (On Hosios Loukas and the Joshua Roll: Carolyn L. Connor, “Hosios Loukas as a Victory Church,” Greek, Roman, and Byzantine Studies 33, no. 3 (1992): 293-308, esp. 304-305 and on Castelseprio: Kurt Weitzmann, The Fresco Cycle of S. Maria di Castelseprio, Princeton: Princeton University Press, 1951)

Coming back to my original statement, the Joshua Roll is… unique, luxurious and remarkable in every aspect and so much so Hellenistic in spirit! The Byzantium I love!

For a Full Digital Fascimile of the Manuscript, please check the site of the Vatican Library: https://digi.vatlib.it/view/MSS_Pal.gr.431.pt.B 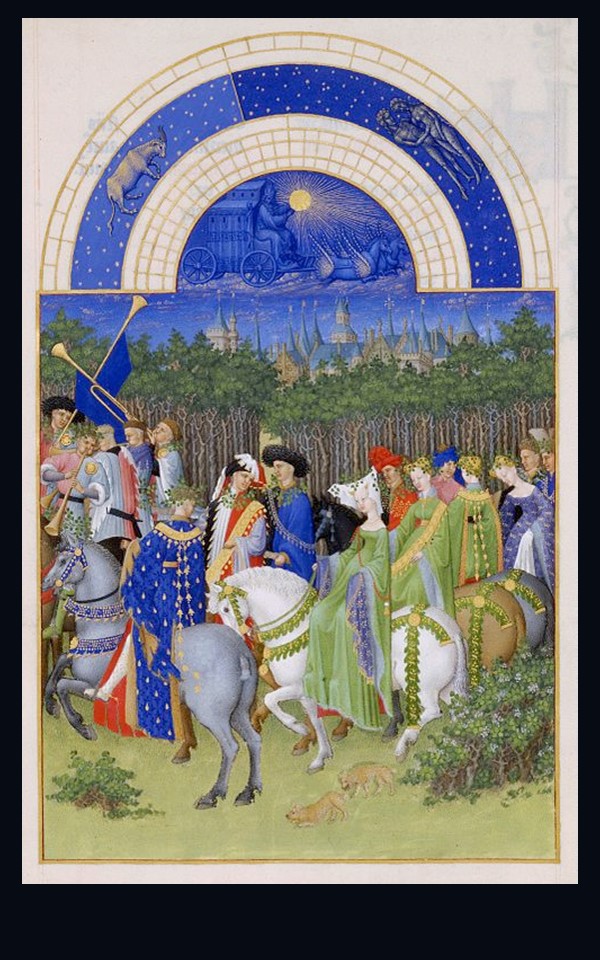 The Limbourg Brothers are among my favorite artists! The month of May in “Très Riches Heures du Duc de Berry,” the manuscript, is another favorite.

A merry group of horse-riding men and women, wearing their finest garments, May wreaths on their heads, attended by servants and entertained by musicians, this group of elegant aristocrats depicts, according to the Limbourg brothers, a May pageant. In the center of the composition, a young woman, maybe Joan II, Countess of Auvergne and Boulogne, on a white horse, is dressed in a rich traditional green garment, known at the time as “ livrée de Mai.” In front of her, with his back to the viewer, is the Duc de Berry, impressive in his gold-embroidered blue robe, is depicted turning and talking to his bride-to-be.

Paul Limbourg, the probable painter of this page, organized his composition in three levels. The Duke’s entourage occupies the first level displaying vibrant colors, subtle movement and wealth. The second level, a deep, green forest, along with two indications of shrubbery in the very front of the picture, creates an alcove of tranquility, serenity and a sense of safety for the group of aristocrats to continue. Finally, the third level, rendered in lapis lazuli blue, indicates the possible location of this event. The rooftops of Hôtel de Neslé, the Conciergerie and the Tour de l’Horloge in the Isle de la Cité tell us we are in Paris, it’s the 1st of May and it’s time to celebrate!