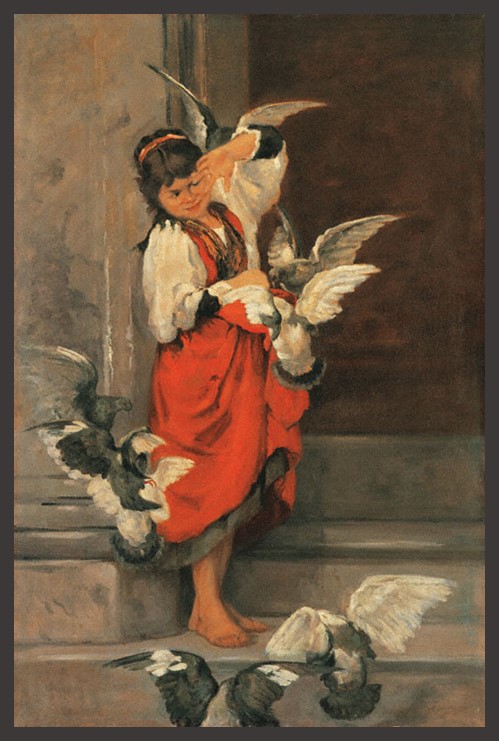 The Girl with the Pigeons is a famous Greek painting by Polychronis Lembesis in the Collection of the Averoff Museum of Neo-Hellenic Art in Metsovo. It reminds me of a poem I read by  Ustav Shah… With the onset of the sun in the horizon, the little creatures awake / And dance and sing melodies tantamount to a group of chortling people / Oh, how I wish such convivial sights be captured / And played back on repeat everytime you feel low     /     As vagabonds they fly in search of food and shelter / And when the sun does set, off they disappear in their nests / Robbing the nature of its beauty… Lembesis definitely captured the vagabonds’ convivial sight, their dance, and singing melodies… https://hellopoetry.com/words/pigeon/

Polychronis Lembesis, one of Greece’s most important 19th-century painters, is a distinguished representative of the so-called “School of Munich”, the major 19th-century Greek Art Movement. Born on the Island of Salamis, graced with ‘smiling shores and calm pine-covered slopes,’ Lembesis spent a humble early life near his father’s flock. Distinguishing himself as a student, he was granted a scholarship by the politician Dimitrios Voulgaris (“Tsoumpes”) to study painting at the Athens School of Fine Arts, firstly, and then, in 1875, at the Royal Academy of Fine Arts of Munich. His teachers in Munich were Wilhelm Lindenschmidt and Ludwig von Löfftz; his best friend was the already-known Greek painter Nicholaos Gyzis.

Returning to Greece, in 1880, the artist settled in the Thision area of Athens, where he established a Studio, becoming well-known as a Portraitist, a teacher of painting (Prime Minister Stefanos Dragoumis’s children were his students), and a Hagiographer. He participated in many group exhibitions in Athens, the 1903 International Exhibition of Paris, and the International Exhibition of Athens, in 1904. Polychronis was a gentle, humble, and quiet man throughout his life, wrote Nikos Zias. Disappointed by the Athenian artistic ‘disputes’ Polychronis Lembesis chose to retire to the island of his birth, Salamis, where he lived “in obscurity” and poverty.https://www.nationalgallery.gr/en/painting-permanent-exhibition/painter/lembesis-polychronis.html and https://www.tovima.gr/2008/11/24/opinions/o-pio-spoydaios-ellinas-zwgrafos-2/

The artist was an accomplished Portraitist, using the dark background of the painting, to brightly project the sitter’s head. He was an excellent landscape painter, connecting the composition of each painting with either the historicity of the place he depicts or with ethnographic references. Lembesis is also an exemplary painter of everyday scenes in a Greek village, not with the arrogance of the scholarly observer as Nikos Zias writes, but with the simplicity of the man who lives in it. https://www.tovima.gr/2008/11/24/opinions/o-pio-spoydaios-ellinas-zwgrafos-2/

Every time I visit the Epirote village of Metsovo, I feel it is my duty to check on the Averoff Museum of Neo-Hellenic Art and stand, once more, in front of The Girl with the Pigeons. I like how the artist captured the ‘moment’ without being an Impressionist, with his free, broad brush strokes, and warm colours. I enjoy the ‘energy’ he creates around a standing young girl who feeds the boisterous vagabonds and tries to protect herself at the same time… I can almost hear their overexcited melodies…