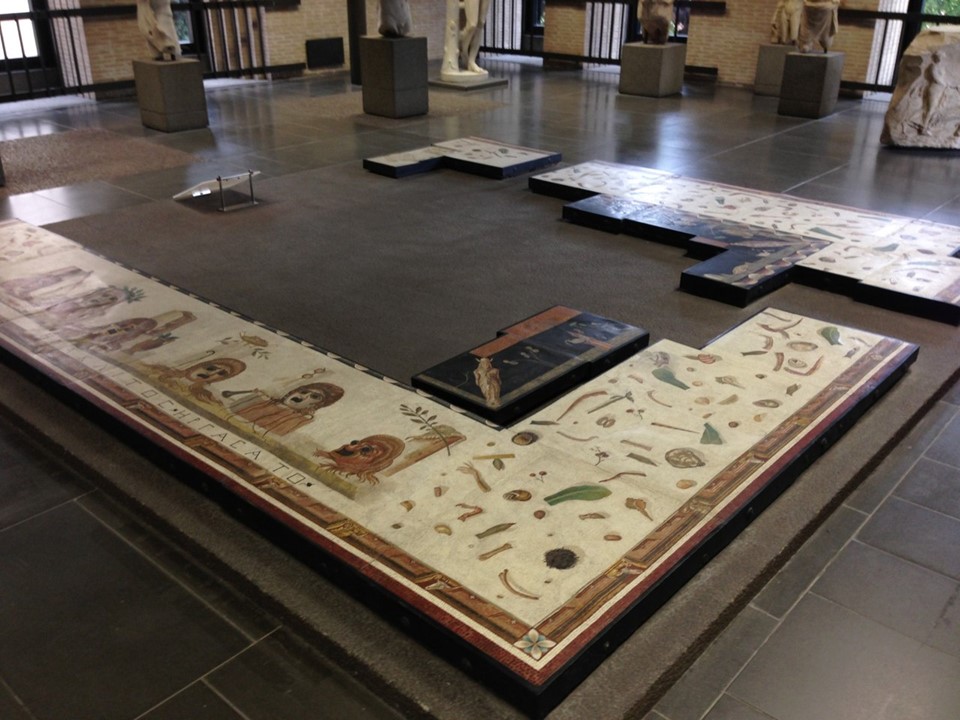 Heraklitos and the Asarotos Oikos Mosaic is one of the many reasons why you should visit the Gregoriano Profano Museum in the Vatican!  It’s an exhibit I dearly love, a mosaic that amuses me, tests my observation… a work of art of the highest quality!

The story of the Asarotos Oikos theme in mosaic-work takes us back to the Hellenistic Period, to the great city of Pergamon on the coast of Asia Minor, and to a legendary mosaicist, called Sosus (εκ Περγάμου ψηφιδογράφος Σώσος). Pliny the Elder describes Hellenistic mosaic making and Sosus’s accomplishments as “…Paved floors originated among the Greeks and were skilfully embellished with a kind of paintwork until this was superseded by mosaics. In this latter field the most famous exponent was Sosus, who at Pergamum laid the floor of what is known in Greek as ‘the Unswept Room’ because, by means of small cubes tinted in various shades, he represented on the floor refuse from the dinner table and other sweepings, malting them appear as if they had been left there…” Pliny, Natural History, 36.60.25 https://www.loebclassics.com/view/pliny_elder-natural_history/1938/pb_LCL419.145.xml?readMode=reader

The Gregoriano Profano Museum in the Vatican has one of the finest Asarotos Oikos mosaics, carefully executed and brightly colored. It was discovered in 1833, on the Aventine Hill in Rome, and as the archaeologists established, it decorated the dining room floor of a Hadrian period villa. This is a unique mosaic, the masterpiece of Heraklitos, the mosaicist, proud to sign his name.

Heraklitos created a complex floor mosaic composition. The threshold of the triclinium (the Roman dining-room) greeted guests with a design of theatrical masks, ritual objects, and the mosaicist’s signature! The central mosaic decoration presented a complex Nilotic scene, now mostly destroyed. The Assarotos Oikos themed mosaic, boarder-like, covered the four sides of the room depicting, on a white background, “…the debris of a banquet, the remains that would normally be swept away.” It is amusing for me to try to identify what Heraklitos depicted on this amazing floor… fruit, leafy vegetables, lobster and crab claws, clams and oysters, sea urchins, chicken bones, and nutshells, even a tiny mouse, gnawing on a walnut shell. I am equally amazed at the artist’s skill to demonstrate an understanding of three-dimentionality by using contrasting colors and casting shadows against the white floor background. http://www.museivaticani.va/content/museivaticani/en/collezioni/musei/museo-gregoriano-profano/Mosaico-dell-asarotos-oikos.html

An interesting article titled “The asàrotos òikos mosaic as an elite status symbol” by Ehud Fathy of the Tel Aviv University provides an interesting explanation of how we should read this mosaic theme. “The asàrotos òikos mosaics have all been discovered exclusively in the domestic spaces of the Roman elite. The manufacturing of such detailed mosaics must have demanded great financial investment, and while the mosaics must have amused the guests with their Trompe-l’œil qualities, it is hard to believe that such an expenditure was made with this sole purpose in mind. The aim of this article is to explore the asàrotos òikos mosaics as a Roman status symbol of elitist erudition… ” file:///C:/Users/aspil/Downloads/Dialnet-TheAsarotosOikosMosaicAsAnEliteStatusSymbol-6037238%20(1).pdf

For a PowerPoint on the Vatican Asarotos Oikos Mosaic, please… click HERE! 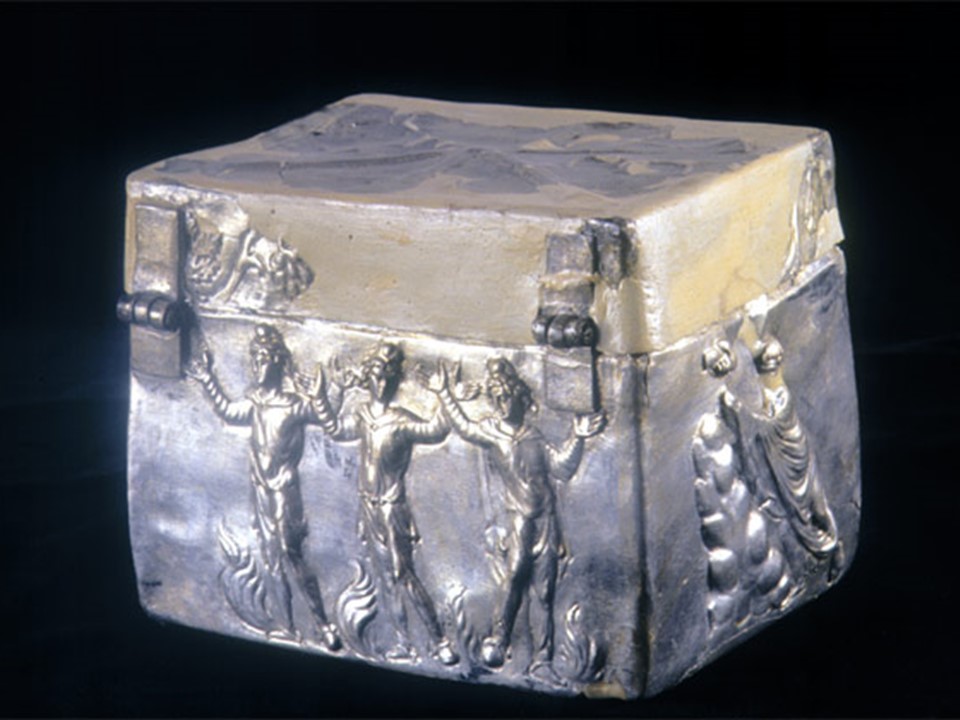 The Nea Herakleia Reliquary is exhibited in the Museum of Byzantine Culture, a favorite museum of mine, in Thessaloniki, Greece. http://odysseus.culture.gr/h/4/eh431.jsp?obj_id=4751&mm_id=983

The Reliquary in focus is a small rectangular silver box of hammered silver with a hinged lid. The lid has been badly damaged in several places, but its four decorated sides are in relatively good condition. The Traditio Legis, Christ’s passing of the law to Saints Peter and Paul adorns the front side of the reliquary. The other three sides, inspired by the Old Testament, present three very popular and symbolic scenes, the Three Hebrews, Daniel in the Lion’s Den and Moses receiving the Law. The lid is decorated with a Christogram flanked by the Greek letters α (alpha) and ω (omega) defining the omnipresence of God, the beginning and the end, as α is the first letter of the Greek alphabet and ω its last. The sides of the reliquary’s lid are decorated with a vine scroll with leaves, quite beautifully chiseled, and grapes. https://leipsanothiki.blogspot.com/2014/02/245.html

Kurt Weitzman in his “Age of Spirituality” the introductory essay says that “The transition from the dying classical to the rising and finally triumphant Christian culture was a complex process, extending over several centuries, in which the two coexisted and competed with each other.” He is so right! The Nea Herakleia Reliquary, a relatively unfamiliar example of silverwork, is an amazing example of this extraordinary era. An item of the Christian faith, decorated with New and Old Testament scenes, the Reliquary in focus, is an example of a movement in art, scholars often call the “Theodosian Renaissance.” The artist focused his interest in the depiction of the human body, facial expression, and movement. Very little else matters, with probably the exception of the two Lions flanking Daniel. There are restrictions or exaggerations in corporeality, but modeling is plastic in conception, postures are natural, facial expressions emotional and drapery softly modeled. This is indeed an exceptional work of art worth exploring further. http://odysseus.culture.gr/h/4/eh430.jsp?obj_id=4751

Visiting the Thessaloniki Museum for Byzantine Culture is a true cultural experience. In 1989, the Museum’s architect, Kyriakos Krokos, wrote: “I wanted a space within which movement would create a feeling of freedom, stirring up the senses, and where the exhibit would be a surprise within the movement. I believe that as visitors walk through the Museum Halls there are many pleasant surprises.  The floor and wall mosaics in the first Early Christian Period Room, attract everybody’s attention. The Byzantine tunics with their fine embroideries, the icons and the intricately illuminated manuscript in the Middle Byzantine Period Room are definitely noticed. Finally, as the visitor is about to leave, one last surprise, a beautiful Post-Byzantine golden eikonostasi, one last startling work of art to ponder about. https://mbp.gr/en/building 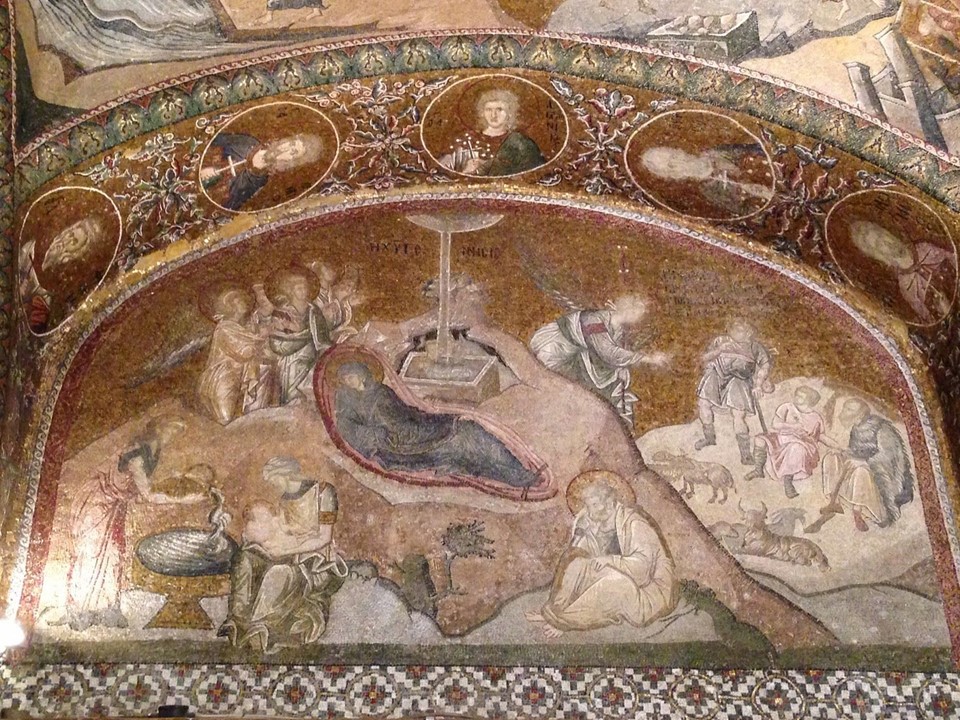 The Church of the Holy Saviour in Chora, part of a grand Monastery, has many stories to tell…

Tradition has it that the church, the Katholikon of a monastic complex, was originally built during the early 5th century, outside the walls of Constantinople, and its full name was “The Church of the Holy Redeemer in the Fields,” It makes sense. When the city of Constantinople expanded at the time of Theodosius II (408-450), and formidable land walls were built by the Emperor, the monastery retained the name Chora (in the Fields), but became part of the defended city.

Historical evidence tells us that it was Maria Dukaina, the mother-in-law of Alexius I Comnenus, who rebuilt the Chora Church and Monastery around 1077–1081 as a cross- domed church, a popular architectural style of the time. Early in the 12th century, yet another Comnenus, Isaac, the 3rd son of Emperor Alexius, stepped in, restoring the church after a disastrous earthquake.

Two centuries later, around 1316-21, the powerful Byzantine statesman Theodore Metochites enlarged the church and embellished it with many fine mosaics and frescoes. Today, the Church of the Holy Saviour in Chora stands as one of the finest examples of the Palaeologian Renaissance, in architecture and mosaic-work. Theodoros Metochitis political career was turbulent during the later years of his life: He was exiled by the usurper Emperor Andronicus III in 1328, but two years later, he was allowed to return to the city and live out the last two years of his life as a monk in his beloved Chora Monastery.

Soon after the fall of Constantinople to the Ottomans, the Chora Church was converted into a mosque, named Kariye Camii, serving the city’s Moslem population up until 1958, when it officially opened to the public as a museum, the Kariye Müzesi. Much of what we see today, much of what we know about Chora Church and Monastery is the work of Thomas Whittemore and Paul A. Underwood, from the Byzantine Institute of America and the Dumbarton Oaks Center for Byzantine Studies, who in 1948, sponsored a restoration and research program.

“Fear not, for, behold, I bring you good tidings of great joy which shall be to all people” Luke 2:10

I can only describe the Chora Church mosaics in general, and the Church’s Nativity scene in particular, as…brilliant,  outstanding, remarkable and exceptional! They best represent the refined taste of Theodore Metochites, a man, passionate about Greek antiquity and obsessed with the ancient Greek idea of ‘grace’ in art. I stand in front of them and I see elegance, harmony and balance in their compositions. I am amazed by the grace, sophistication and spirit of the depicted figures. I feel warmth, as I am enfolded by their divine light. I marvel at their Hellenistic artistic heritage…

Best Wishes for the Holiday Season!!!

A PowerPoint on the Nativity scene in the Church of the Holy Saviour in Chora is… HERE! 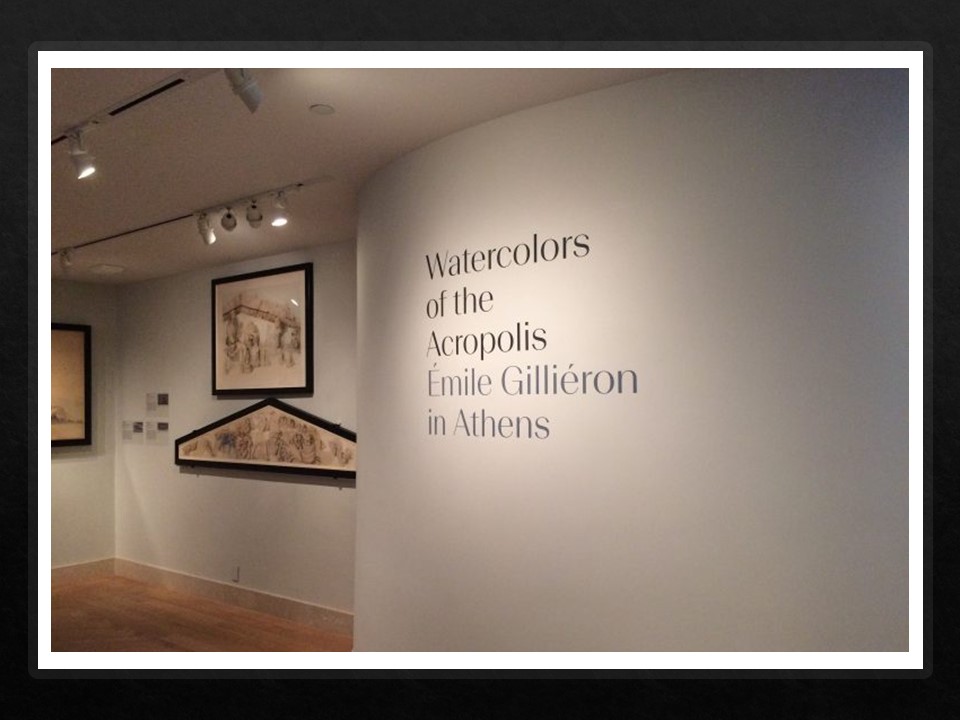 While in New York, and if you are an Ancient Greek Art aficionado, the Metropolitan Museum of Art Exhibition Watercolors of the Acropolis: Émile Gilliéron in Athens is a MUST!

Back in 2011, I saw the Historic Images of the Greek Bronze Age: The Reproductions of E. Gilliéron & Son Metropolitan Museum Exhibition, and today I am eager and hopeful, to see the new Exhibition on Gilliéron père work for the Acropolis Archaic sculptures. The Gilliérons are tightly connected with Greek Bronze Age Archaeology. They were astonishing artists, hired by Sir Arthur Evans, to reconstruct the fresco paintings in the palace at Knossos. Their copies of Minoan Frescoes are highly recognizable today, allowing the viewer to accurately observe the fragmentary parts of the original fresco along with their own creative proposal for the appearance of missing elements. The Gilliéron restored Minoan Frescoes, in watercolours or plaster, popularized and spread the study of Greek Bronze Age Art throughout Europe and America. https://www.metmuseum.org/press/exhibitions/2010/e-gilli%C3%A9ron–sons-reproductions-of-art-from-greek-bronze-age-on-view-at-metropolitan-museum

The current Metropolitan Museum Exhibition titled Watercolors of the Acropolis: Émile Gilliéron in Athens features five watercolours that depict architectural sculptures from Archaic Monuments discovered in the Acropolis of Athens.

Three of the largest watercolours depict the Hekatompedos Pediment. The central composition features two Lions tearing apart a Bull. On the left side, Herakles is depicted fighting a Triton and on the right, the Winged three-bodied Deamon, commonly known as “Bluebeard” with the symbols of the three elements of nature in his hands, fills the triangular space masterfully.

The third watercolour presents pedimental sculptures depicting the Introduction of Herakles into Olympos or as described in the Acropolis Museum of Athens, the Apotheosis (deification) of Hercules. This pedimental composition, made in an Attic workshop, belonged to an unidentified small temple. It shows an imposing seated Zeus, a frontally depicted Hera, Hercules dressed in his characteristic lion skin, Iris and Athena, the hero’s divine guardian. The entire composition, as Emile Gillieron shows us, was painted with bright colours, traces of which are still visible today.

The Hydra pediment is the last Emile Gillieronwatercolour in the MET Exhibition. Once more, the watercolour accurately shows pedimental sculptures of great aesthetic value, very descriptive and brightly painted. The Hydra Pediment comes from an unidentified small building on the Athenian Acropolis.

According to the MET, “In the days before color photography, hand-colored drawings and photographs were the principal means of documenting polychrome Greek art.” But “Reproductions and copies fell out of fashion, and Gilliéron’s work… retired to The Met’s basement… and remained in storage until 2015.” Today and after “the conservators’ heroic efforts to rehabilitate these forgotten pieces” we can once more admire the power with which these amazing watercolours “provide a fascinating insight into the sculptures found at the Acropolis as they appeared when they were first unearthed around the turn of the century.”

For a PowerPoint inspired by the Exhibition, please… click HERE!